Vermont. The Green Mountain State. Totally accurate. It’s beautiful and green and clean around here. I know some of you are going – wait, you should visit in late March/April when there’s maple syruping going on or the fall when those beautiful green mountains are ablaze with color or in the winter to ski. Let me tell you, summer is a great time. There are no crowds, the weather is wonderful, warm but not hot, and the scenery is picturesque with fresh green everywhere.

You know you’re in Vermont when you see all the solar panels. They are everywhere, business and residential. I love you Vermont but your roads, or at least the ones we traveled, (like Hwy 2 between Montpelier and Danville) stink. I mean they are horrible. Not to bash the state because there are a lot of pros. Even in Montpelier, the State’s capital, things are calm and peaceful. I love my home state of Georgia but there’s parts of Atlanta that I don’t like walking around. It’s not like that here. I’d let me kiddos go walking alone (if I knew I could find them again). 🙂

We had a planned stop at ECHO (a museum about Lake Champlain that’s supposed to be really good) but ditched it so we could stay later in Lake Placid.

We decided ice cream sounded like a good summer activity, so we headed over to The Ben and Jerry Ice Cream Store and Factory Tour. It was crazy busy when we got there. While we waited for our tour time, the boys got their pressed pennies and Trevor handled the phone call with the insurance company about the windshield. Adults are $4 but kids are free and you have specific tour times on your ticket. We were excited about seeing the operations, but when our group went through, they were cleaning the machines so no ice cream was being made. They had been making mint chocolate chip just prior. They are required to clean everything every 72 hours and whenever they change flavors. We had to watch another video instead. So that was kind of a bummer, but after the tour guide sent us downstairs for samples, everyone was all smiles and no one complained. They had AmeriCone Dream set out for us to sample. It’s was yummy.

We also visited the Flavor Graveyard, where the retired flavors go. The line for ice crean was super long and we decided it would be cheaper to get a half gallon at the grocery store, anyway, so we skipped ice cream other than our sample. It was too late after dinner to grab any though.

Then to the hotel for a good nights rest to prepare us for the ultimate epic largest cornmaze in New England, the Great Vermont Cornmaze. The boys wanted to separate and race parents vs kids but, for obvious reasons, we broke into parent/kid teams instead. Mason immediately chose me and Tuck got stuck with dear old dad. He’s a hoot to be around (way more fun than I am) but he’s a little directionally challenged. Remember Indiana?? Of course, this meant the “trash” talk began. The boys decided we needed team names and nicknames. Tuck wanted to be Corn Destroyer and Trevor was Corn Ball and together they were the Barnstormers. Mason wanted something corny, pun intended, so we were team A-maze-ing Duo and my name was Pop and his was Corn (Duo. Pop-Corn. You get it, right?) At that point it was on like a chicken bone! 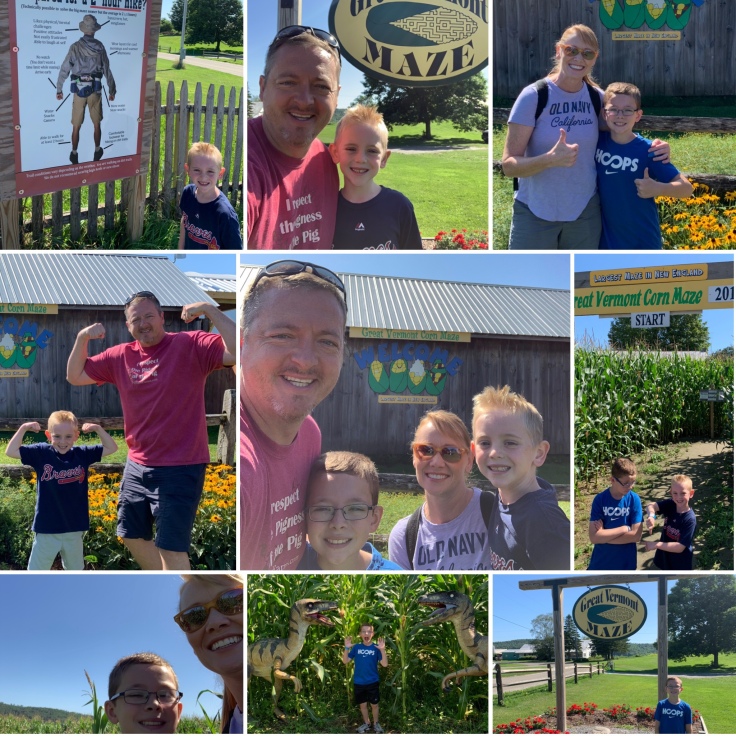 So there’s all these signs about being prepared with water, snacks, comfy shoes, etc. It’s a cornmaze relax thought Team Barnstormer who went in with none of those except the shoes. The A-maze-ing Duo when in with all of those. Better to be prepared. (Sunscreen and bug spray, however, were applied to both teams, mom’s orders).

The maze was super hard. It’s funny to see how people chose to navigate the maze; some with strategies; some just wondering around aimless. The maze creator, Mike, told us it’s fine to break into groups but he said we’d probably get together later in the maze and have more fun. He knows a thing or two about this stuff so we should have listened but too much trash talk had gone on. There had to be a winner and a loser. Well, about two hours in, we decided to get together. It was fun to compare notes and see how much ground one team has covered and how little the other had. I’m leaving out names to protect Barnstormer’s, I mean the unnamed team’s, ego. Although, neither team had completed the maze yet. In our defense, we were rocking the maze until we had to take,not only, the emergency exits but also a staff only exit for an important potty break. That got us a little turned around. But we saw a lot of the maze including two frustration bells and a boat bell, all while looking for the all important success bell.

When we got back together, Barnstormers had used a cheat and then after about another 30mins-1hr another lady in the maze offered us a cheat. Three hours and 20 hot and sweaty minutes and we found the success bell!! It couldn’t have come at a better time because we were out of water and snacks. Hallelujah!! Absolute best time. Boys wanted to go back and do it again the next day. 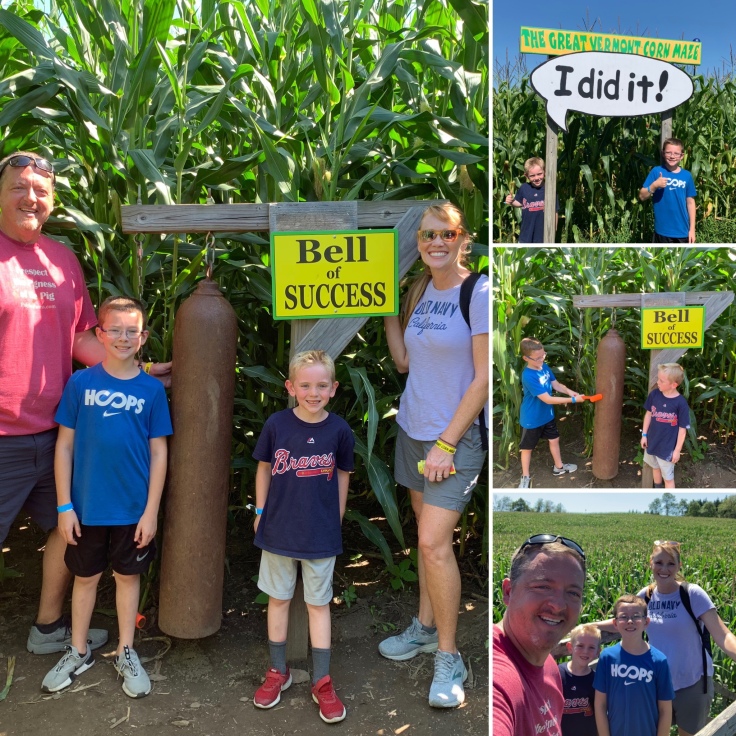 So how do you celebrate victory? A trip to the grocery store. No, well, yes. We needed a few items from the store but we promised the kids ice cream so we made good on our promise. The idea was for everyone to agree on a flavor and get a half gallon or preferably something smaller to share. Remember, all we have is a cooler. There is no keeping leftovers. Imagine my surprise when I turned the corner to find the Ben and Jerry’s was buy 2 get 2 free. Buy 2 Get 2!!! 2+2=4. There are 4 of us! We could each get our own flavors. Coincidence? I think not. So we each spent a painstaking five to seven minutes mulling over all the choices and making our final selections. Trev picked out Everything Bit The.., Tuck selected Chocolate Brownie Fudge, Mason got the AmeriCone Dream and I struggled between New York Super Chunk Fudge and Pistachio Pistachio. I have never tried Ben and Jerry’s Pistachio (only Moo Bears and it’s delish) but I knew I liked the NY so I played it safe and went with that. We went back to the hotel and gave ourselves tummy aches; especially when the fellas decided to eat the cookies the hotel puts out in the evenings with their ice cream. Total junk food but the boys thought it was awesome so I rolled with it.

A local at the hotel told us about the Hope Cemetery that had some really fantastic headstones so we stopped by. I know it seems creepy but these granite headstones are works of art.

The next morning we got up and headed for Fruitlands Bed and Breakfast for UPick raspberries and blueberries. We picked berries and the boys daydreamed about owning a farm again. We keep talking about a farm but we like to travel so much I don’t know how we would manage that. But there’s nothing wrong with dreaming. This adventure started with a dream. We picked a pint of each and the boys had almost eaten all of it by the afternoon.

I wasn’t too worried because at our next stop, Cabot Cheese Visitor Center, they, well mostly Mason, filled up on cheese samples. They no longer give factory tours but they have a 10 minute video and a Q&A session along with a variety of cheese samples. Tuck didn’t love any. Mason liked them all but Hot Buffalo was his fave. Trev liked the Habanero and I really enjoyed the Tomato Basil. We had just been to the grocery store so I didn’t need any cheese but we did sample a Maple Zucchini Relish, which the three of us all, surprising, enjoyed so we purchased it and were off to our next stop.

You can’t come to Vermont and not talk about maple syrup and you can’t talk about Vermont maple syrup without talking about the Goodrich’s. So to their farm we went. The Goodrich’s farm has about 120-125,000 maple trees on over 5,000 acres and the family has been making maple syrup for 9 generations. Although the syrup is made in late winter/early spring, they still have little tours that explain the process and equipment, etc. I had no idea that it takes about 44 gallons or so of maple sap to make 1 gallon of syrup. No wonder maple syrup is so expensive. There are also four color grades: Golden, Amber, Dark, and Very Dark. We were able to sample all four plus vanilla bean, blueberry, maple cream, and coffee. The boys also got a piece of maple candy. That stuff is SWEET! I took a tee-tiny nip, not a bite just a little scrapping of it, and it was sweet. Don’t worry Aunt Trishy (aka Dr. Hulsey), I went out and immediately bought the boys toothbrushes with built-in timers to hopefully help with brushing. Not even joking. 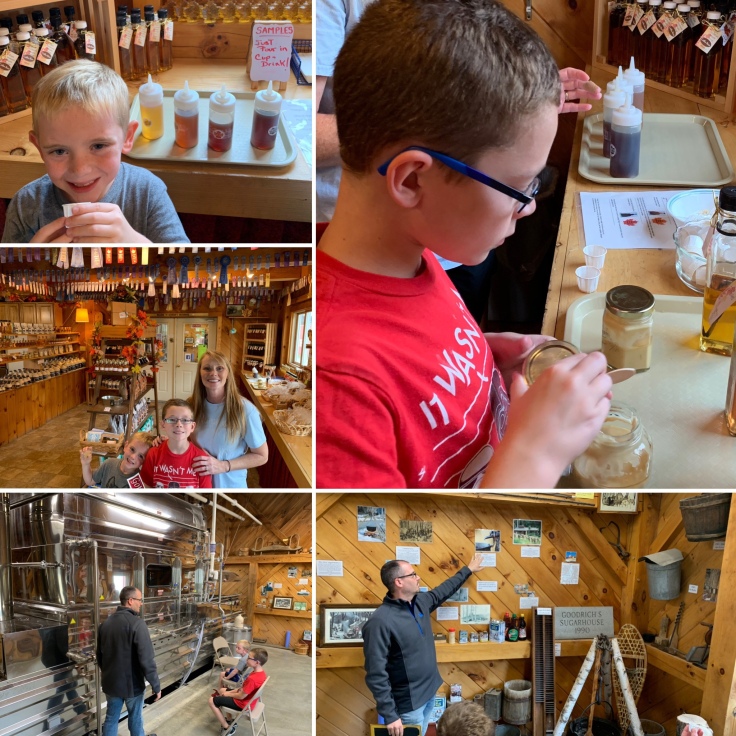 Vermont was a lot of fun but now off to the state with the motto – Live Free or Die.