I know South Carolina has more to it than beaches, fishing, and golf but why fight a good thing.

Our first stop – Myrtle Beach. Ok, so the hurricanes have moved out, kids are back in school, no crowds, and the weather is still in the high 80s to low 90s. Do you know what that makes for? Yep, a wonderful low key vacation. We took advantage of this and just chilled at the beach with the exception of our Myrtle Beach tradition of eating at Captain George’s Seafood Buffet. The boys have been talking about Captain George’s since Maine.

We hardly left the hotel. We usually stay at condos when we’re at the beach but you know we’re trying to stay at our two hotel chains for points (which has been working out pretty well for us). So we booked Hampton Inn Oceanfront and it was great! The hotel was clean and the hotel staff was so friendly. They let the boys borrow a couple boogie boards and a chair. The hotel had games, 4 pools, 2 lazy rivers, and the laundry was cheap. Wonderful. They have some suites too with little kitchenettes but those were booked already. I would definitely stay here again.

The beach wasn’t very crowded and these little “islands” formed as the tide went out and it made these great little pools for the boys to play around in.

We did go out one other night to go fishing off the Apache Fishing Pier. Thanks again Kevin. Not a lot of action that evening on our side but there were some guys at the end of the pier that caught a shark and a good size King Mackerel. Trev caught a little spot and I caught a little spot and a sea trout at the same time but when I was reeling it out of the water I smacked the poor trout up against one of the pier legs and flung my fish off. Man!!! I would have been Supermom if I could have made it just a few more feet. Oh well, the boys didn’t catch anything but they enjoyed baiting the hooks with shrimp and squid. 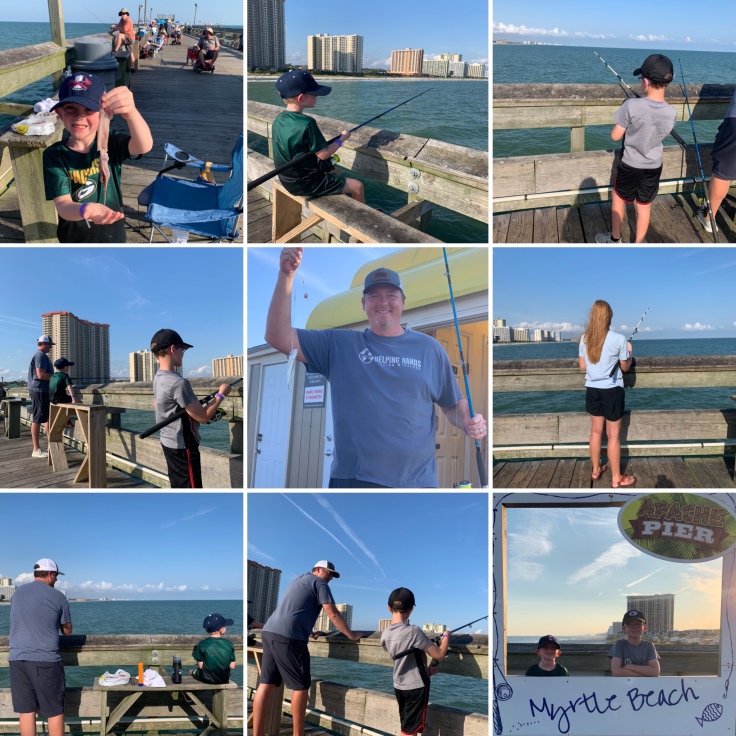 No one wanted to leave Myrtle but we had other stuff already planned.

We left Myrtle and headed further south to Charleston and crossed over the Arthur Ravenel Jr Bridge, known for its triangular shape and being illuminated at night.

The next morning started early as the boys had a fishing excursion planned. They got to fish for drum and shark. Captain Brandon, with All In One Charters, was great with the boys. He told them they wouldn’t see lots of action on this type of trip, like they had on a previous fishing trip in PCB,but when they did it would be good size fish. The boys didn’t care. They just wanted an opportunity to catch a shark. Captain was right.

Mason caught a beautiful 25 lbs Red Drum and a 20 lbs Black Fin Shark. He hooked a third shark but it got away.

Tuck caught an ugly Toadfish, a skate, and a big old 40 lbs Bullshark. You should see the video of him trying to reel that thing in. Tucker barely weights over 45 lbs himself. They loved it!!!

The next day we were up bright and early to head over to the Fort Sumter Visitors Center to catch our ferry over to Fort Sumter. The boys completed the Jr Ranger Program.

We participated in the flag raising ceremony, which I think is important for our children to know that we live in a great nation. We, as a nation, don’t always get things right but we have amazing freedoms that way too many people abuse and take for granted. 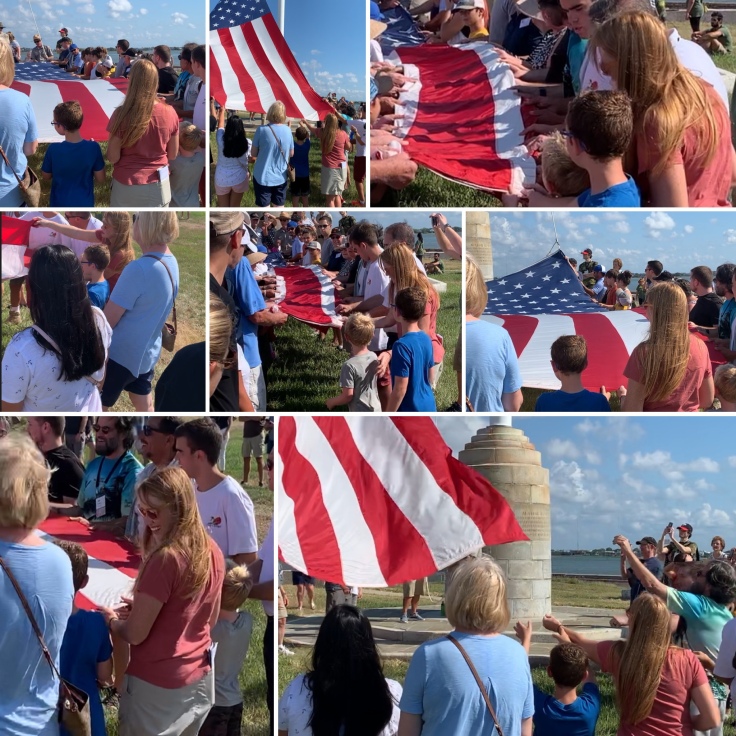 It was a good experience, however, it didn’t leave a lot of time for the museum. Fort Sumter is only accessible by boat so we had to book a ferry. You only get about an hour on the island. We all felt rushed. We needed a good 30 more minutes at least.

The day after that we visited Patriot Park Naval and Maritime Museum. We toured the USS Yorktown, a WWII aircraft carrier and the USS Clamagore, a Cold War submarine. We also toured the USS Laffey, nicknamed “the ship that wouldn’t die” due to withstanding an assault of 22 Japanese bombers and suicide kamikazes; taking hits from six kamikazes and four bomb strikes and was still afloat.

I feel so bad for Mason. He wanted to read EVERY sign, plaque, etc. He always feels rushed. We try to let him read as much as we can but this trip would take three times as long if we let him read all he wanted. While he was reading, he found information about the USS Albacore, which we toured in New Hampshire. The Albacore sunk the Imperial Japanese Navy boat, the Tahio. He was excited to see how history ties together.

After the boat tours, I headed back to the car with Tucker while Mason and Trevor walked through the Vietnam Experience.

After lunch, the plan was to drive a little over half way and call it a day. But Mason and Trev agreed it would be better to drive the whole way. So we did.

Made it to our happy place a day early.