Wait! Wait! I have to back up to before we reach Canada because I forgot to mention dinner. The sweet couple at the football game, I mentioned in the last post, told us we needed to try pasties in the U P and that everyone goes out for a fish fry for dinner on Fridays. Well, we happened upon Dobber’s Pasties first and decided to give it a whirl. Pasties are kind of like a meat pie in a pastry. 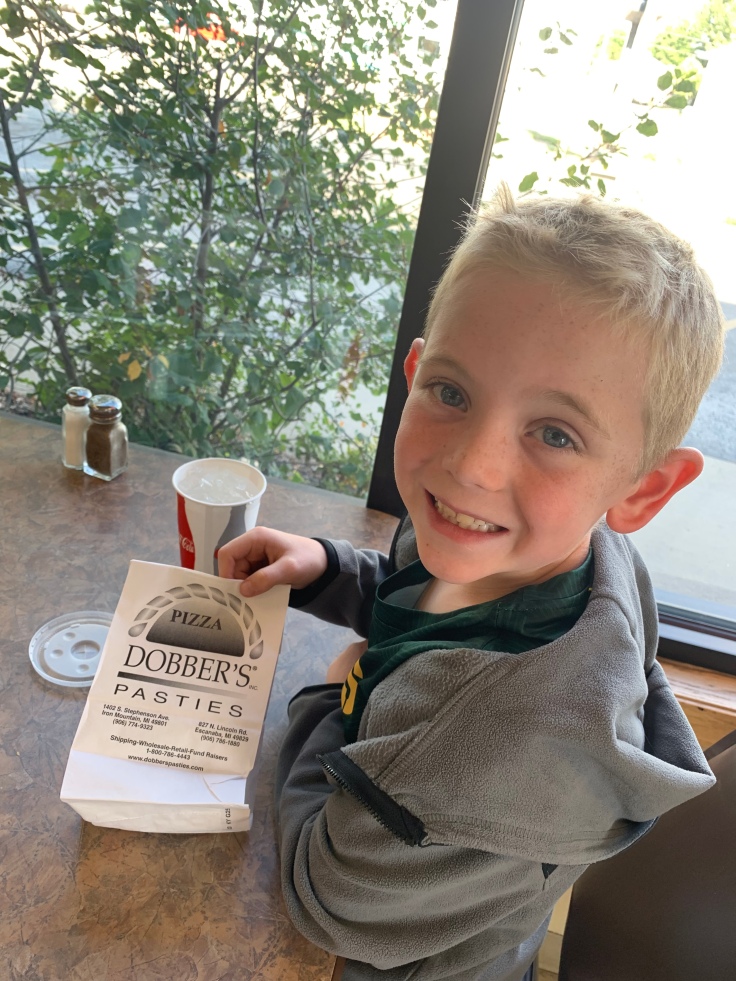 Trev was taking pics and forgot to snap a shot of his ham and cheese. We’re so predictable, huh? I bet none of you are surprised with our orders.

Tuck took one bite and wouldn’t eat anymore. Trevor didn’t love his but finished it. I ate less than half and only ate that much because Trev was giving me the we-have-to-set-a-good-example-you-better-eat-it face. (He told me later in the car when I was sick at my stomach that that wasn’t the face he was giving me but I still don’t believe him). As for Mason, well, he couldn’t decide which one he liked the best. He ate most of everyone else’s. I love that kid! He’s not afraid to try new food and most of the time he likes it.

Now, no disrespect to the Dobber’s at all! They have really great reviews and pasties were recommended as a must. They just weren’t for us. It kind of made me think of one of those little frozen pot pies you get at the grocery store except without all the added salt and flavor.

We pulled up to customs around 10 o’clock. it’s dark and light drizzle so the pics were grainy. Sorry. We were so worried about our cooler full of food. I have fruit, people, fruit! I feel like a brazen criminal at this point. Trespassing in North Dakota and now this! We decided we would just declare it and if my apples go, my apples go. So Trev and I are having these funny what could go wrong kind of conversations while we waited for our turn in line. Mason is not catching the humor and was getting stressed out.

We pull up and the best parts of the conversation go something like this:

Canadian Border Patrol: Other than food and clothes, do you have anything else in the vehicle?

Trevor: (Wait! What? I can keep my food? Trev was so surprised she said other than food he fumbled for an answer) Uh, uh…some iPads and some laptops (we only brought one laptop but now we sound like we’re fencing stolen laptops).

CBP: What do you both do for a living?

Trevor: I used to own a college textbook store (that’s not what you do now and now we’re going to jail ) and my wife stays at home (why do I even bother keeping my CPA license anymore?)

CBP: Sir, I didn’t ask you what you used to do. I asked you what you currently do. (Jail, we’re going to jail)

CBP: How do you live if you’re wife stays at home and you don’t make any money? (Yep, definitely going to jail. She probably thinks we’re selling all those laptops she thinks we brought with us).

Trevor rambles on clarifying what he meant. I’m waiting for us to be pulled aside for inspection.

CBP: Do you have any guns?

CBP: You don’t owe any guns?

Trevor: Yes, I own some but I don’t have any with me.

CBP: So you don’t have any weapons in the car?

Trevor: No, well yeah, I have a knife. (A knife?! You have a pocket knife. Why didn’t he say pocket knife. Just saying knife means it could be a steak knife or a machete. We’re going to jail. How am I going to explain this to the kids?)

She then asks about why we’re coming to Canada. I had to show her our tickets. (Of course, I did. She thinks we’re criminals). We had to roll the windows down so she could see the kids. Then she asks Trevor again:

CBP: Sir, are you sure you don’t have any guns? (How many times is she going to ask us that? She must not believe him. I wonder if she keeps asking because he’s a good ol’ boy from Georgia?).

Trev: Yes, I own guns but I don’t have any with me.

And then…..she let us go. (Yay! No inspection, no jail time). We pull off and Mason goes, “Man, I got to tell you, that was stressful.” Haha!

Welcome to Sault Ste Marie, Ontario, Canada. The International Bridge was cool. The US side was lit up red, white, and blue and the Canadian side was red and white. I tried to take pictures but it was dark and with a light rain, the pictures didn’t turn out well. Just trust me. It was cool.

So we check in and go straight to bed. We had to get up early to get breakfast, pack a lunch, and get on the train. We got there about 7:30am. The train’s peak season is late September and October when the leaves are changing so I was able to find a coupon for 40% off for nonpeak season. Yay!

The Agawa Canyon Tour Train leaves at 8am for the Agawa Canyon, which is only accessible via rail, deep in the Canadian Wilderness. I love saying that; it sounds so adventurous. 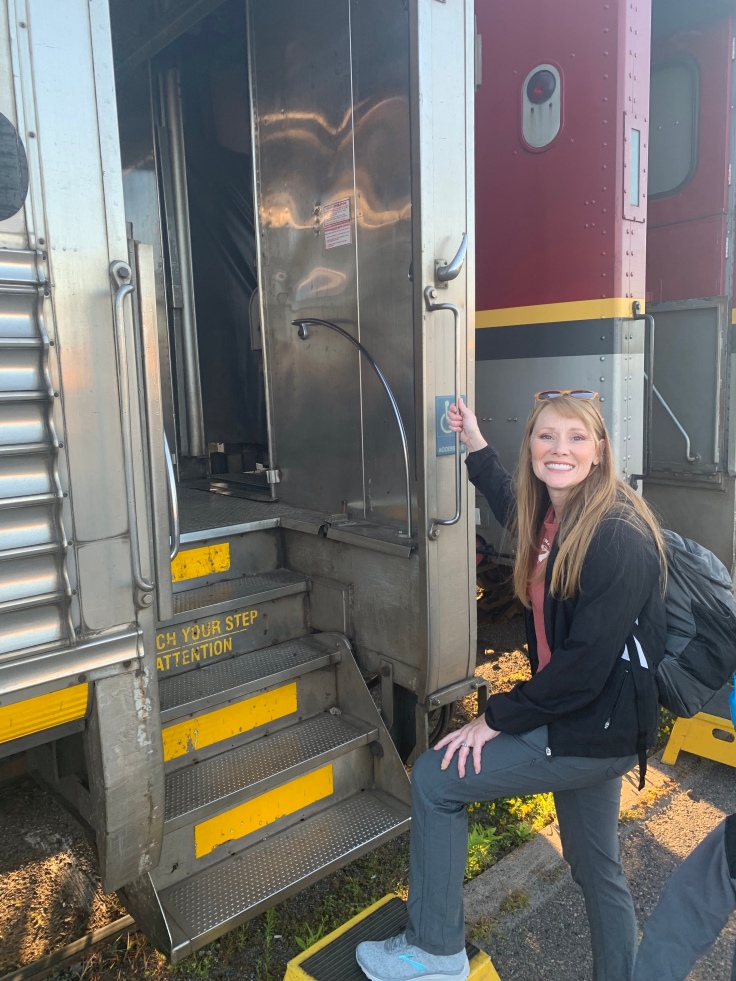 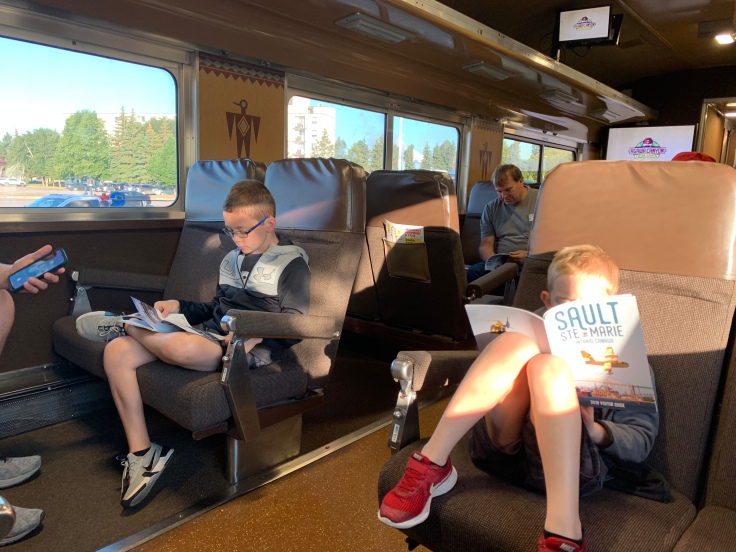 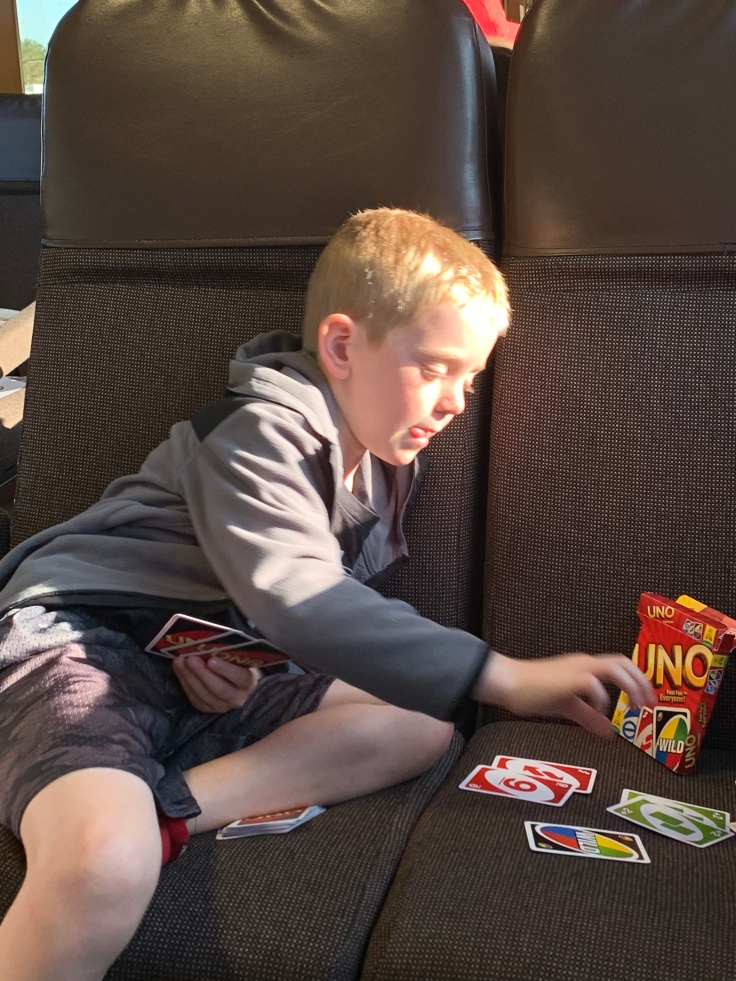 Since it was the off season, we had plenty of room to stretch out. 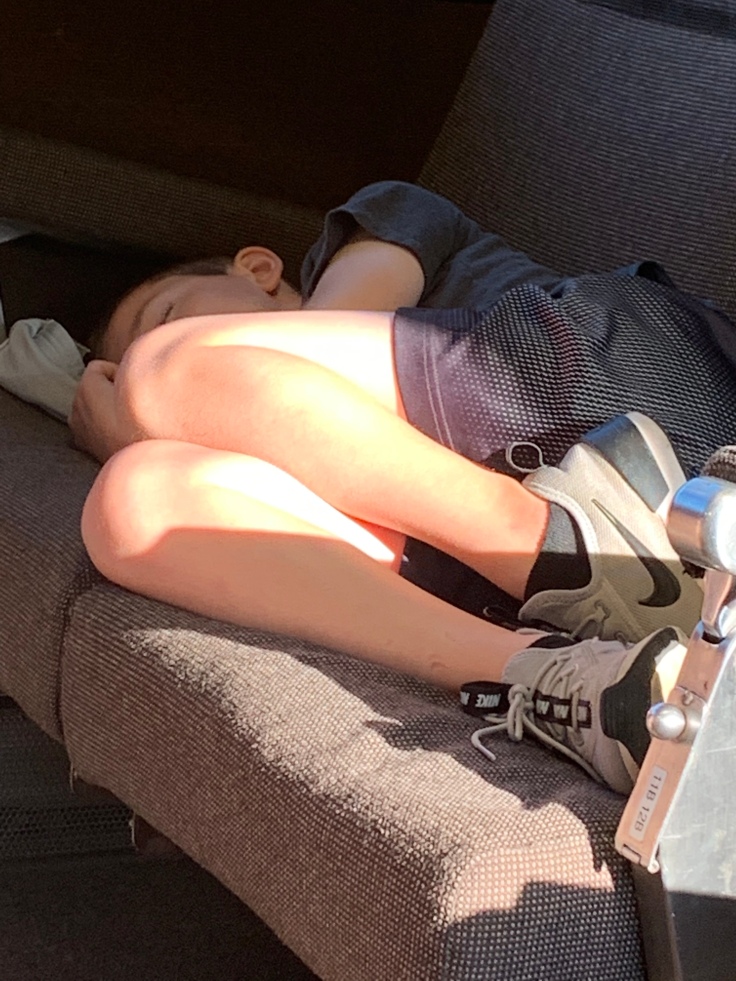 Most of the train ride was green trees, eastern pines with lots of spruce and balsam firs. Then it would open up to these pretty lakes along the way. It is wilderness so there were only a few homes here and there along the way. 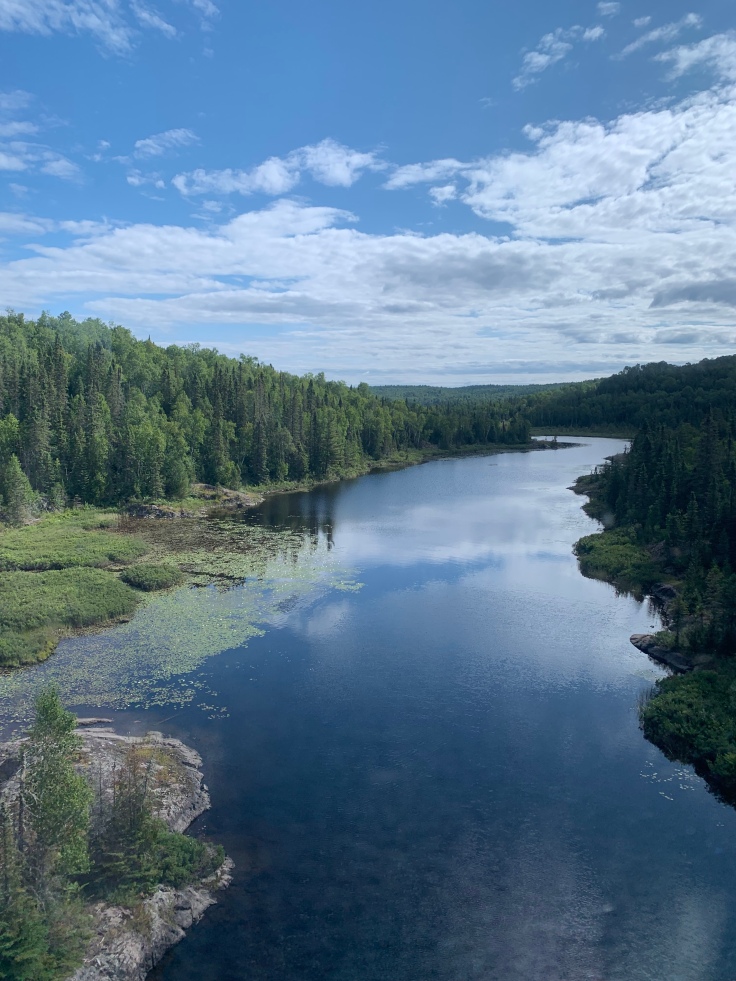 We arrived at the canyon around 12 pm and detrain for about an hour and a half.

We hiked the Lookout Trail first. 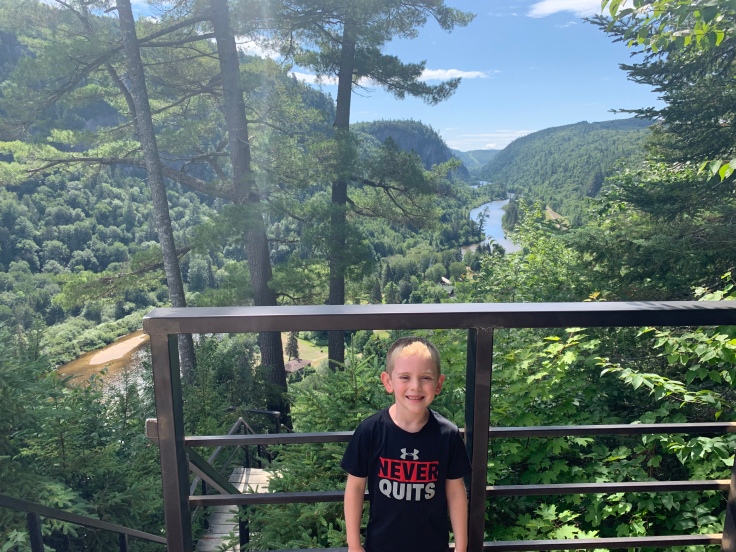 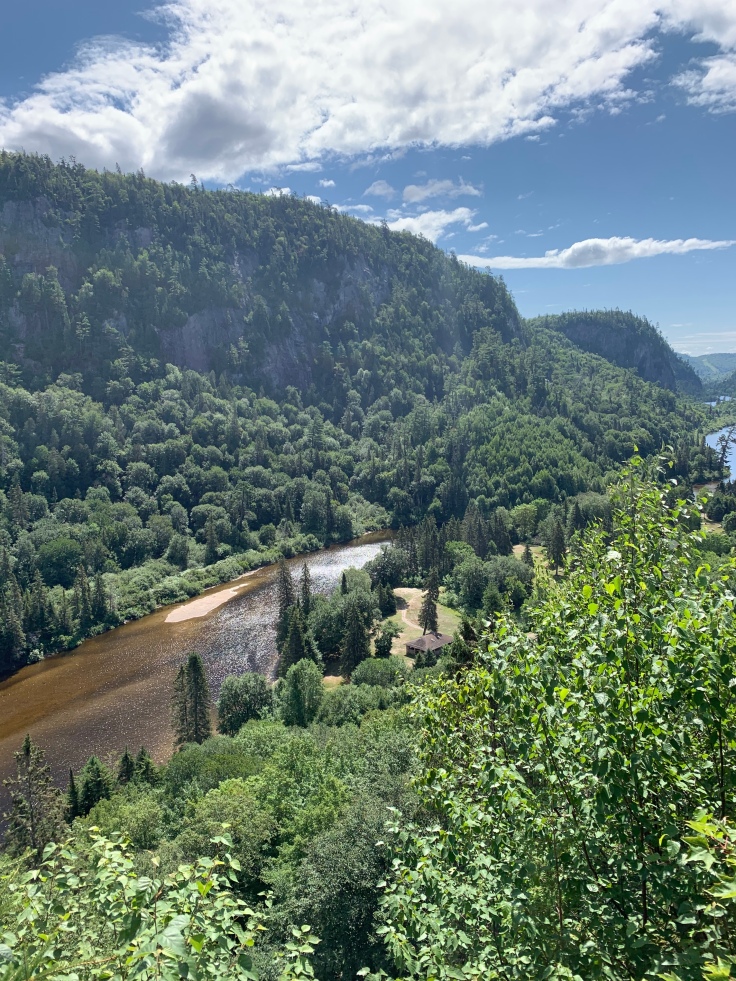 Then to Black Beaver Falls. 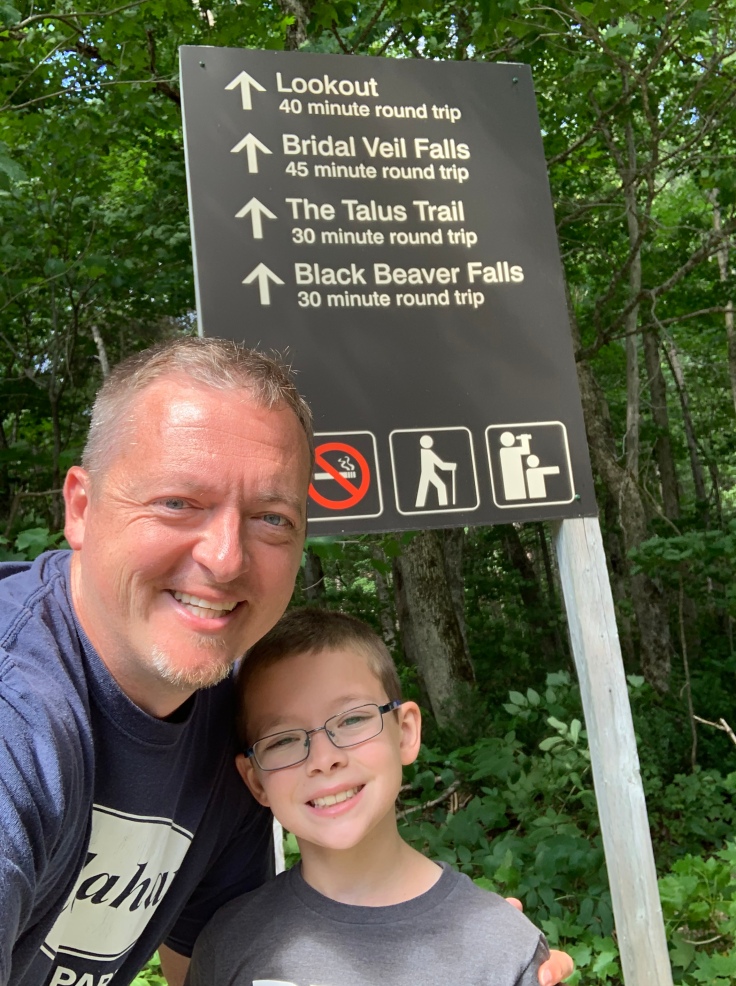 Trevor was enamored by the ferns. He couldn’t quit talking about them and how big they were. 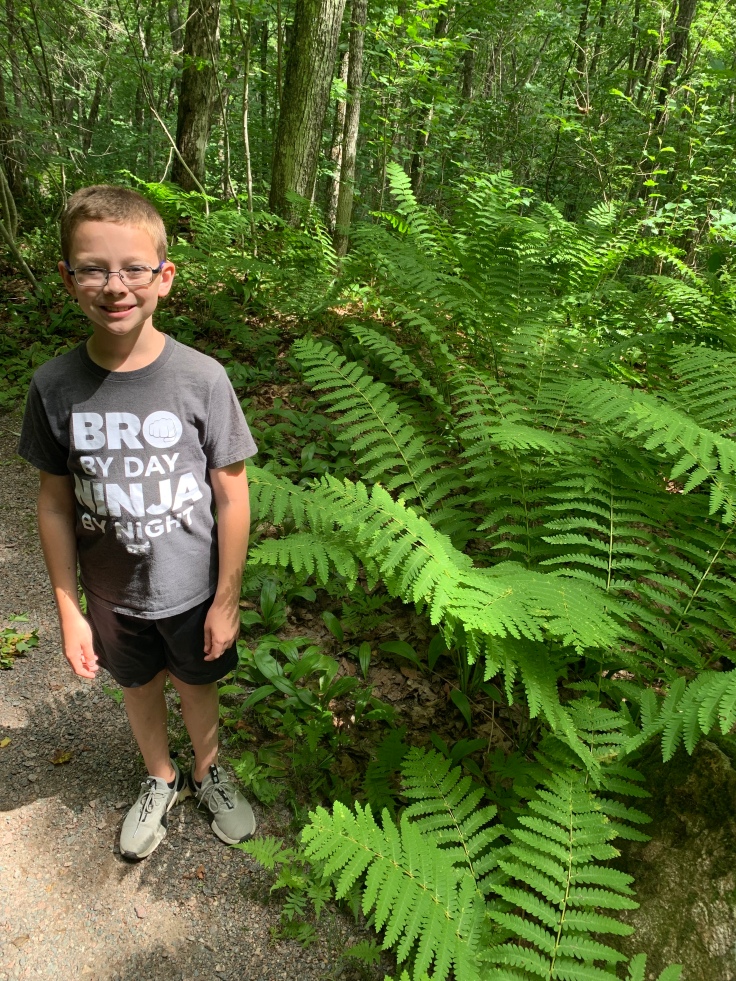 Our last hike was out to Bridal Veil Falls. The falls depend on the weather. Sometimes it’s a raging torrent and other times, like the day we were there, it was down to a trickle. 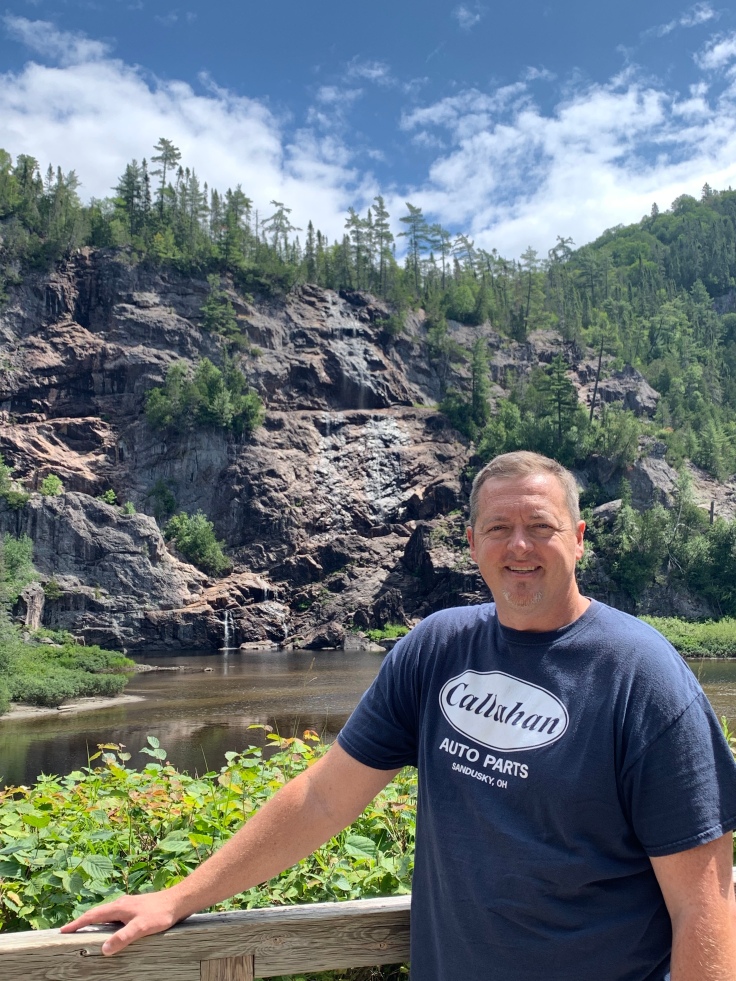 But we were out in this wonderfully fresh air, among amazing beauty and great weather, so it didn’t bother us. Then the whistle blows the 10 min warning and we head back to the train.

Back to the train for another 4 hours or so back. This is where I got restless. We had already seen the beauty. We decided to eat dinner on the train. You get a $10 voucher for food so it was silly not to use it.

It was simple premade sandwiches, which was fine, until Trevor went to take the cheese off of Tuck’s sandwich. There it was; the dreaded white spread.

Tuck doesn’t eat mayo so I went back to the dining car to get a knife to scrape it off. Here’s how that conversation went.

Me: Excuse me, could I please have a knife? My little guy doesn’t eat mayo on his sandwich.

Dining car worker: Here’s a knife but we don’t put condiments on our sandwiches.

DCW: Except butter. We put butter on all the sandwiches.

Me: Butter? Huh. I don’t think I’ve ever had a sandwich with butter.

DCW: Really?!? I’ve never had a sandwich without butter. (The other two workers agreed with her).

Me: Ok then. I’ll let him know it’s butter and not mayo. Maybe he’ll eat it.

Sure enough, all our sandwiches had butter and, I mean, slathered on thick like mayo on both pieces of the bread. And yep, Tuck had no problem eating it with butter. Yum, yum, butter. Ha!

Who else reading this has eaten a sandwich with butter on it like this?

Anyway, back to the train ride. The tour had GPS triggered audio clips that tell about certain parts of the area, etc that I thought was cool. Helped pass the time. 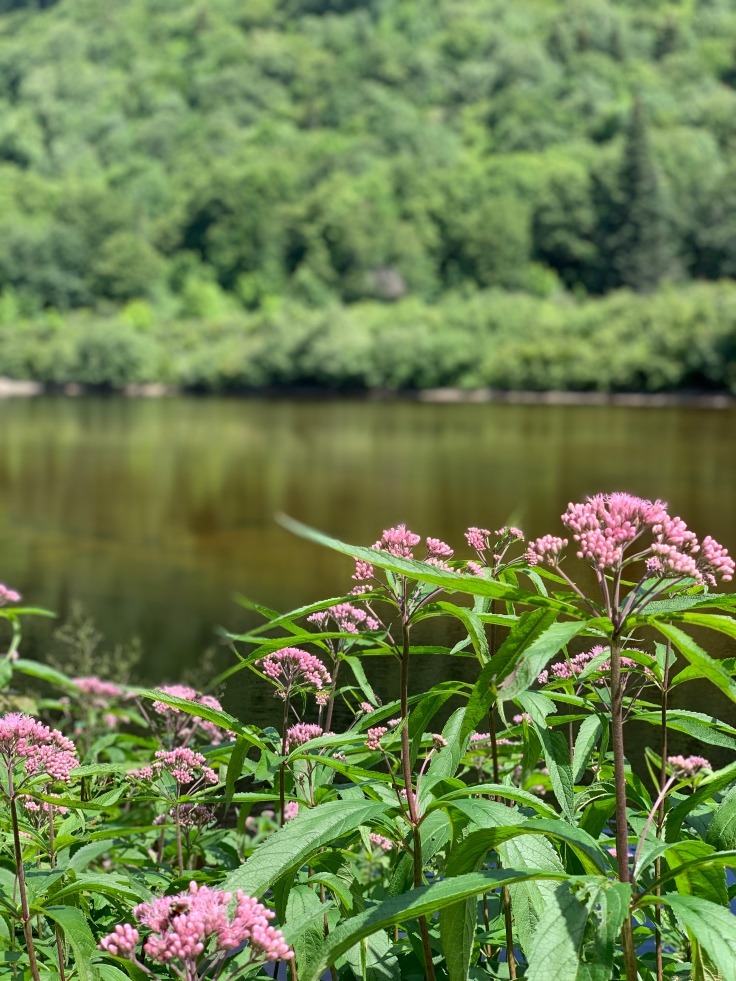 It was a fun experience. I only wished it was like 6 hours instead of 10. But now I can say I’ve been to the Agawa Canyon in the Canadian Wilderness. Cool.

We headed straight for the hotel for baths and bed.

Talk about a slow start to the morning. The kiddos didn’t wake up until 8am. A rarity for those two.

After breakfast, we headed over to the Canadian Bushplane Heritage Centre.

Ontario has one of the best firefighting fleet in the world. Of course, they get lots of practice with over 9,000 wildfires annual charring over 6 million acres annually. The museum is cool because you get a chance to get inside several of the planes.

Pilot and copilot, depends on which kid you ask which one was which. 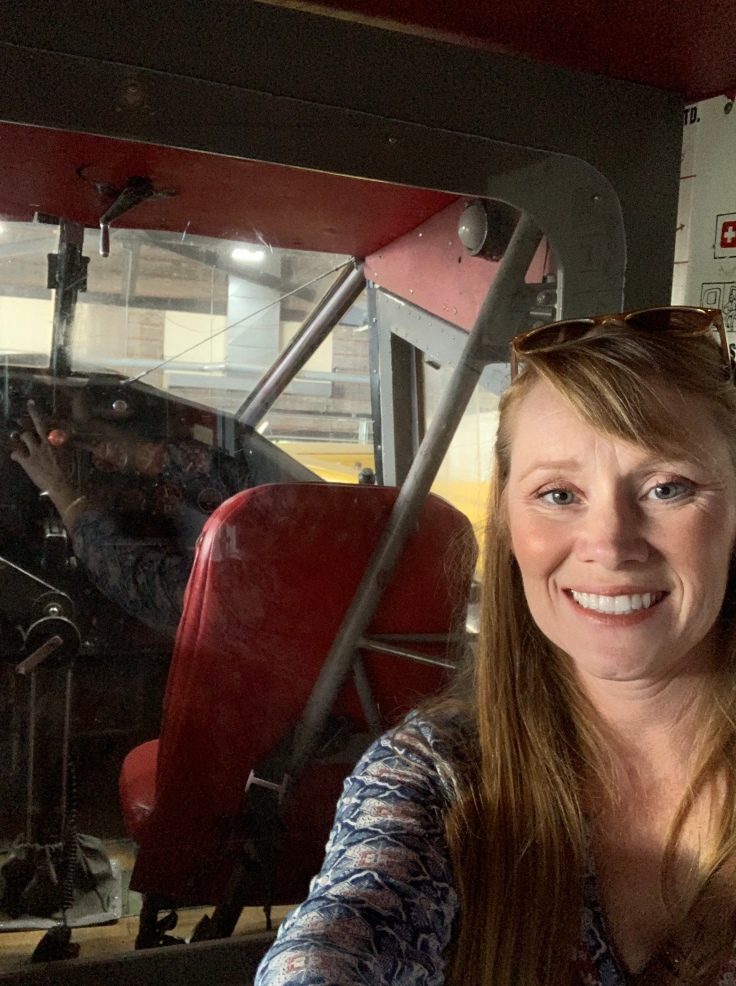 Inside a water bomber. 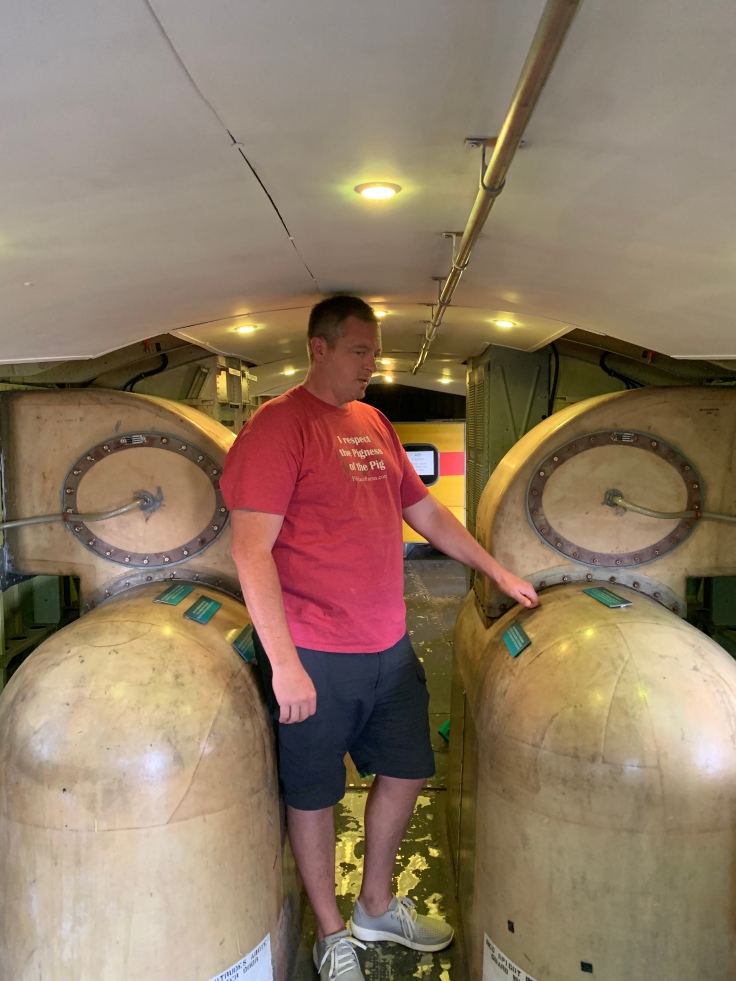 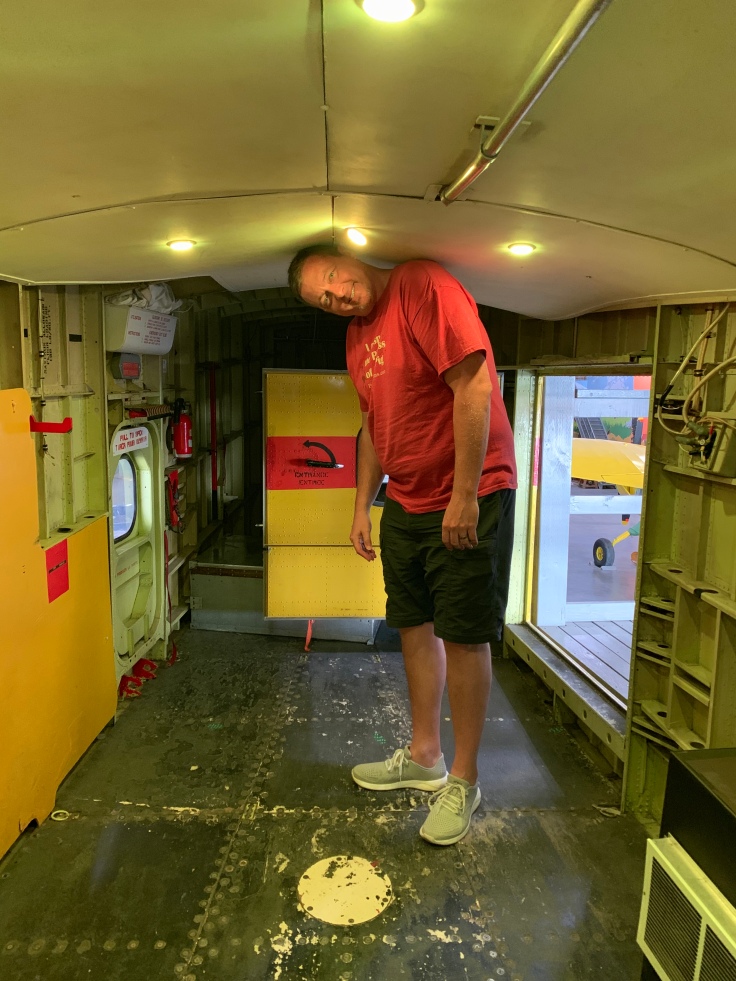 The boys had a blast. 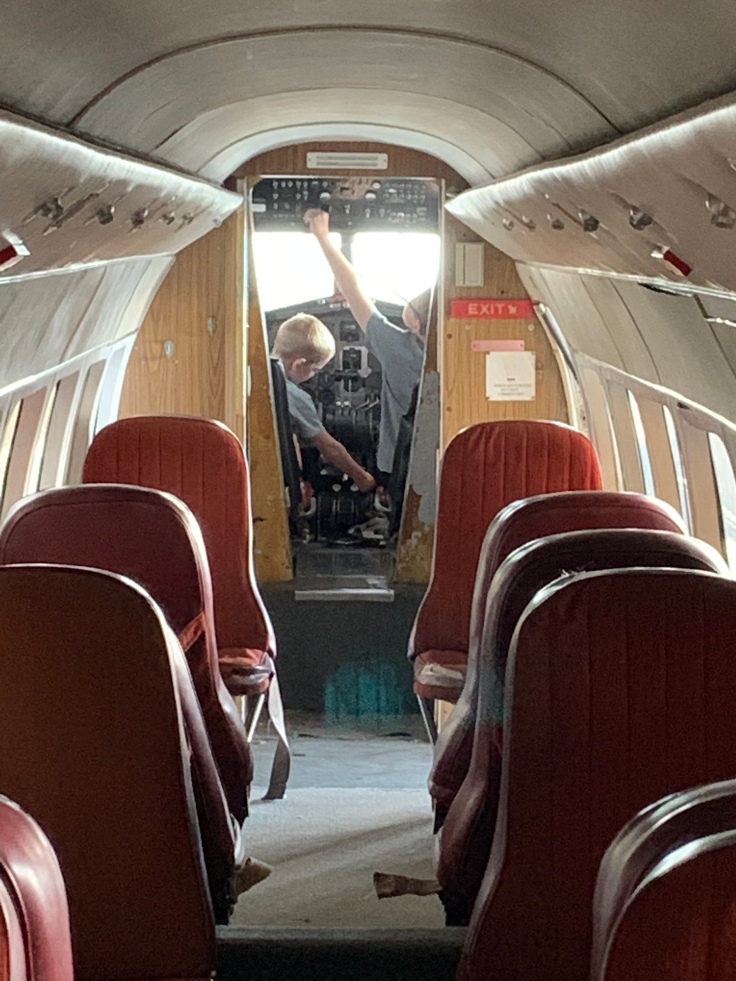 We went down to the Soo Locks but no boats we’re coming in while we were there so we didn’t stick around. 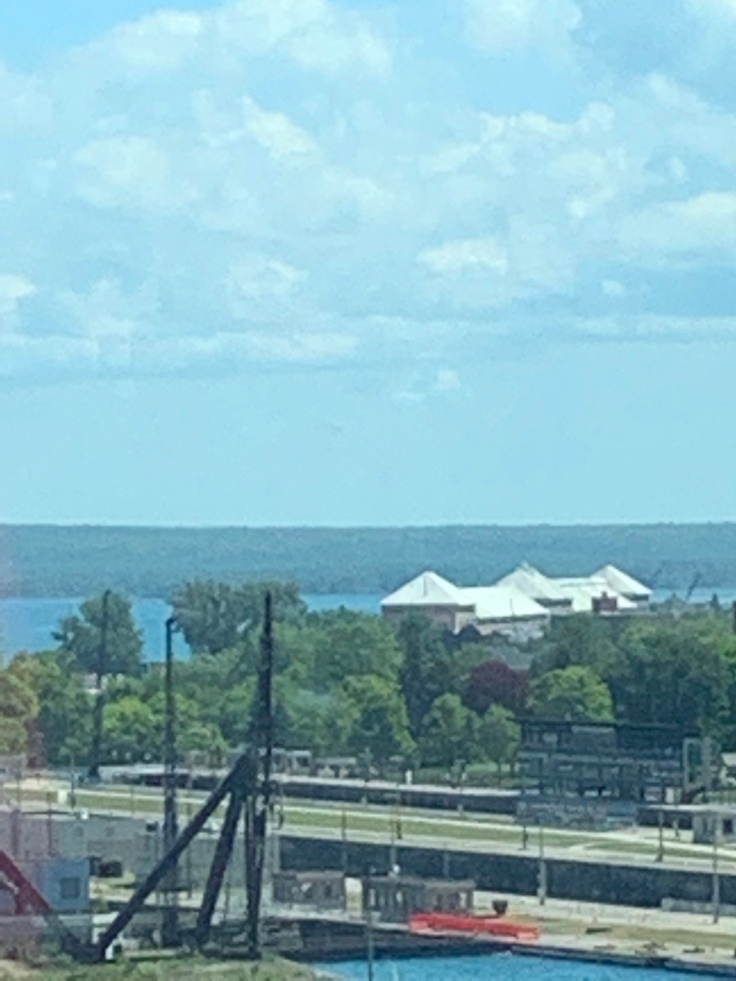 Down the street and across the bridge. 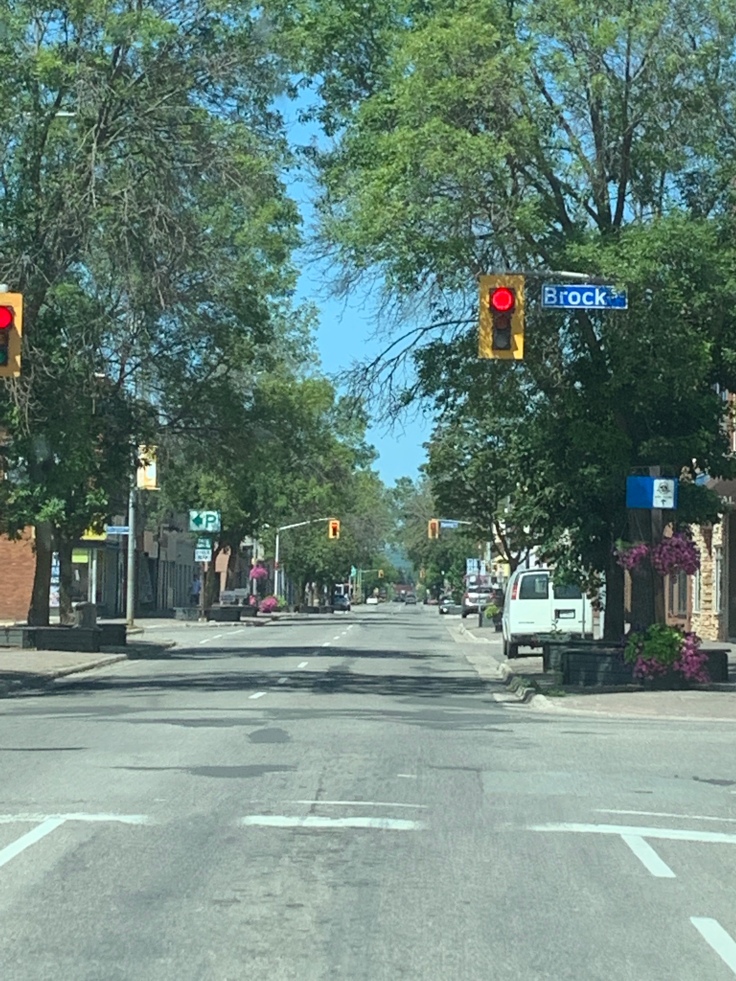 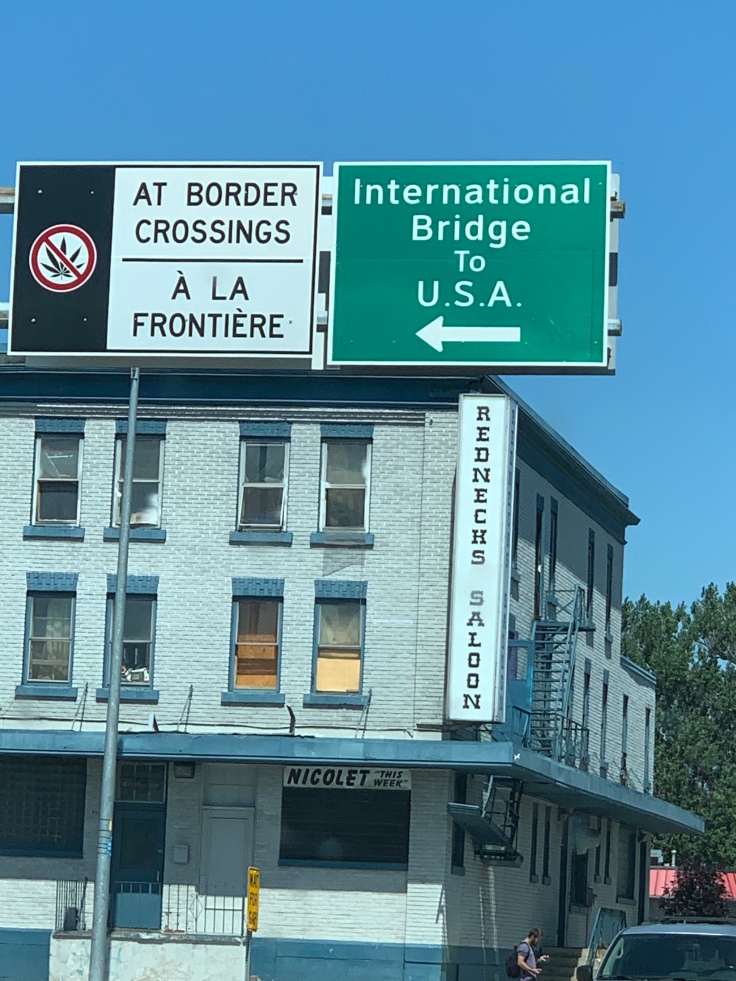 Until next time, Canada…