Well, we are getting closer to home. We are now traveling through states that touch our home state of Georgia. What’s cool about this trip is, for example, even though North Carolina is right next door, there are tons of places to still explore. I’ve never been to the Outer Banks so we decided to stay coastal on our route home. 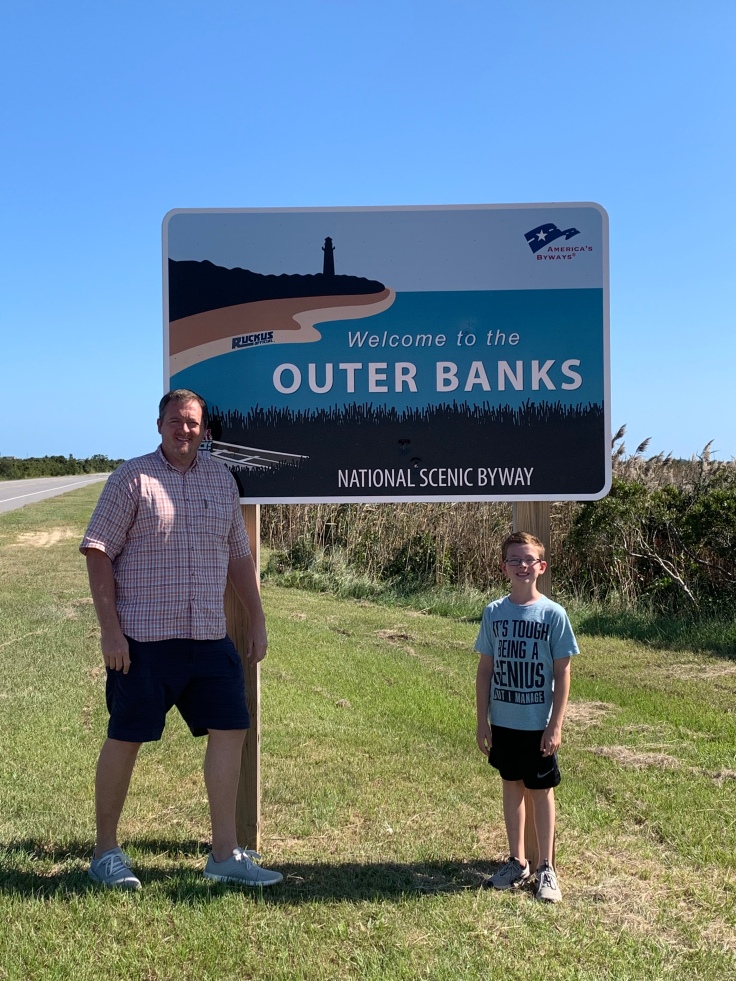 Our original plan was to drive all the way down the Outer Banks and take the ferries. However, Hurricane Dorian hit the southeastern coast a week or so before we arrived. Due to this, the ferry to Oracoke Island was only open to residents, emergency personnel, and the like. There were parts of the highway still covered in sand and water. So we shortened our stay and only drove part way down the barrier islands.

Our first stop in North Carolina was the Wright Brothers Memorial National Park in Kitty Hawk. We attended the Sand and Wind Ranger Talk which was very informative. We all learned lots of tidbits about the Wright Brothers that we didn’t know. The Wright Brothers visited the area multiple years, lived in a tent during the winter, Wilbur proclaimed that the mosquitoes were worst then the typhoid fever that he almost fired from, and they had a sister who encouraged them to not give up. So glad we attended the talk. Mason completed the Jr Ranger program. Tuck didn’t feel like participating. Although, we strongly encourage them to complete the programs, we want these programs to be fun for the boys so they don’t have to do them if they don’t want to. Tuck ran the flight markers. Of course, he wanted to see if he could beat the plane. Oh, he was so close. The fourth and last flight of that historic day on December 17, 1903 was 852 feet in 59 seconds. Tuck ran it in 1 minute 6 seconds. So, so close. After the boys ran the Wright Brother’s flight markers, we headed up to the Monument.

Then we shimmied on down the road to the Cape Hatteras National Seashore making a stop at the Bodie Lighthouse for some hand line crabbing. The boys had a blast! Ever since they got a taste of it on Assateague Island, it has been a constant request to go crabbing.

In Virginia, when we were in Walmart getting groceries, I split off from the boys to grab some stuff and I found them in the sporting goods department. Tuck had a dip net in his hands and Trev had a couple throw lines and there was talk of chicken gizzards. I don’t know who wanted to go more, the boys or Trevor. They were finally going to get their chance. The ocean has been too rough but we found a nice little marsh to go crabbing and it was great. The boys were wearing it out.

After catching crabs, we decided it was a good night for seafood. We stopped at The Dunes Restaurant and met, Patrick, one of the family members of the owners. He used to work in Atlanta and he and Trev chit chatted for awhile about things to do in town. Nice guy and good food.

The next morning we headed over to Jockey’s Ridge State Park to check out the sand dunes. Pretty cool. I asked Trev if this was what the Sahara Desert was like. He would know, as he’s been there several times. He said, yes, except, remove the trees, the water, the cool breeze, and add a lot more sand. Yep, sounds just like it. Hehe.

They have a hang gliding school there. Mason and I wanted to take lessons and then go on a flight with an instructor but they only had a 4pm appointment left and we had to be on the road way earlier than that. Bummer. There were other people on the dunes taking lessons. It looked like a lot of fun.

Tuck looks like he has a five o’clock shadow with the sand all over him after rolling down one of the dunes (intentional, mind you). I’m so not ready for them to grow up yet. 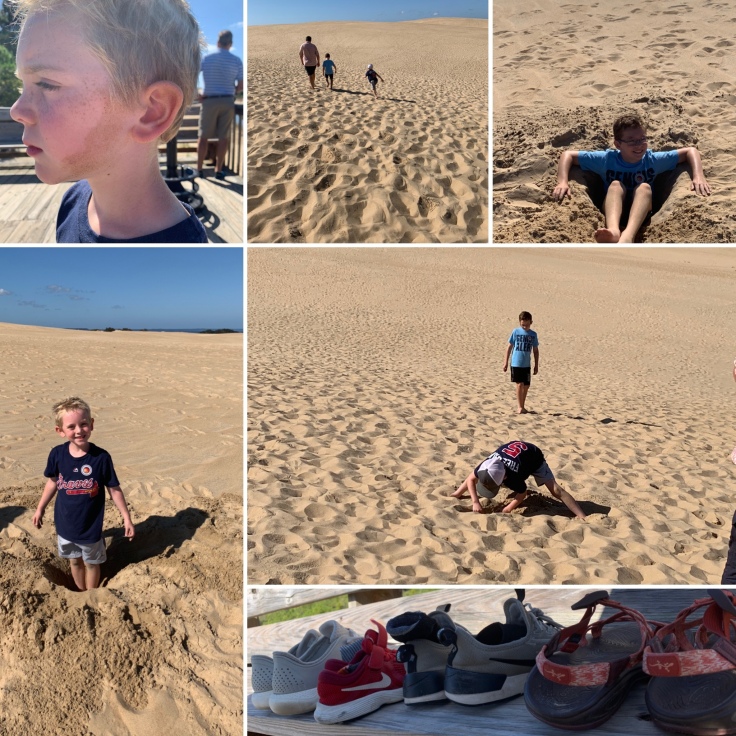 I thought the Outer Banks would be more like Assateague but the parts we saw were all developed like Myrtle or Ocean City. I’m not complaining. I mean, who can complain when this is your hotel room view?! 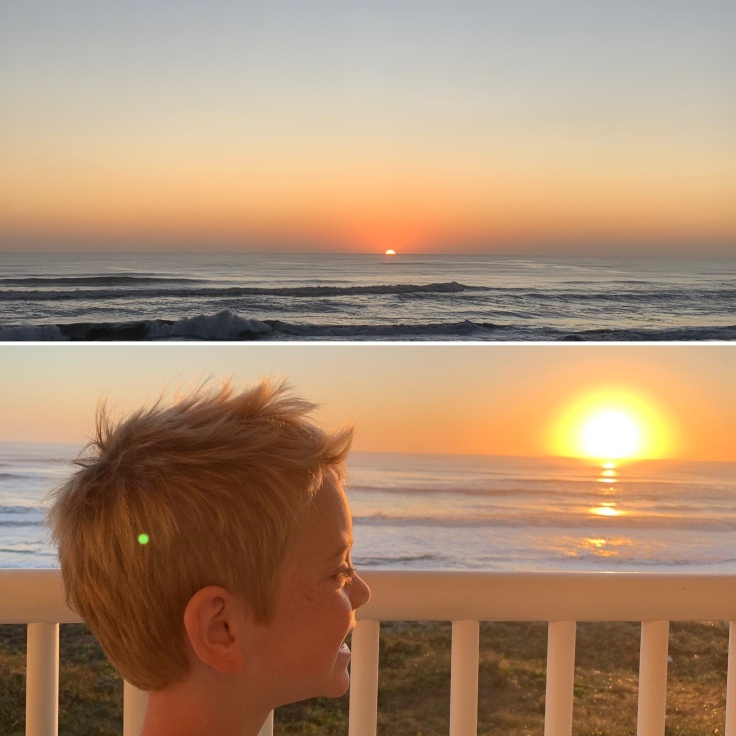 Today was mostly a travel day but we were able to sneak in the Pocosin Lakes National Wildlife Refuge and have a picnic.

We had a recommendation to see the red wolves down at the Red Wolf Education and Health Care Facility. They had a 5 year old red wolf but he had recently been moved to a zoo as a result of the hurricane. They did have two 11 year old wolves that had been moved to the facility last week so they were a bit more skittish. We probably would have stayed a little longer to see if we could get a good picture but we were getting eaten alive by mosquitoes. I’ve never seen so many mosquitoes in one areas before. We all got bit multiple times.

We had a long drive day across Roanoke Island down to Wilmington but we made it to the hotel in time to watch the Georgia/Notre Dame game. Go Dawgs!

Our plan for today was to go to Fort Fisher Historic Site, which is a Civil War fort made of earth and sand. Our friend Kevin, grew up in the Wilmington area and sent us an amazing list of things to do. Thank you very much, sir. However… what’s that line?…the best laid plans of mice and men or something. As we drove through Kure Beach, Trev saw a pier and decided to turn around and check it out. The beach wasn’t crowded at all. I guess that’s because everyone was on the pier fishing. Trevor, who’s like his grandfather, Lee Cain (and yes we call him Lee Cain when we talk about him; don’t ask me why; we just do) will strike up a conversation with anyone. He found a new buddy named Mike fishing on the pier. Real nice guy. He even let the boys each reel in a fish. That made their day.

Mike mentioned that the boys might like the aquarium just down the road. Kevin had also recommended it. We needed a place to picnic and the aquarium had picnic tables. Once the boys saw the aquarium, the decision was pretty much made. It was a good stop. The boys really enjoyed the aquarium. The aquarium had programs all throughout the day. From dive shows to fish feedings, turtle programs, multiple touch tanks, a fossil hunt for shark teeth, and a playground.

The boys absolutely loved petting the sting rays and sharks (I can’t remember which kind but if you ask Mason I’m sure he will). Once the boys read the sign at the Fossil Hunt that stated they could keep whatever they found, they were in it for the long haul. They could have searched for shark teeth all afternoon. For those of you familiar with the Georgia Aquarium, this aquarium was much smaller but the admission was much cheaper.

We thought it would be a quick stop but we wound up staying until almost closing. By that time it was too hot and too close to dinner time to stop at Fort Fisher.

We had a chill morning before heading to our next state which taunts itself as the #1 golfing state in America.