Good-bye Sweet Home Alabama. Hello Rocky Top Tennessee. Well, did you guess correctly? Did you guess north to Tennessee? Tennessee is kind of like Alabama, in the fact that we will pass through these states multiple times during this journey. This time we are headed to the state’s capital of Nashville.

Though we are not here long, we packed it in. We started the day off with another workout. Are you as shocked as I am? Remember I use the term workout loosely but at least it was physical activity. So let’s call that a win.

After breakfast, we headed over to the iconic Grand Ole Opry for a backstage tour. I have to tell you, I was pretty pumped about this one. It was my pick after all. The tour was great. Pretty cool even if you aren’t a country music fan. Just ask Mason. He doesn’t listen to country and he still gave it two thumbs up getting to see all the backstage going ons.

Beside the presentation and the tour of the backstage, you get to stand on the Opry stage on THE CIRCLE. For those of you non-country fans, the Grand Ole Opry is a radio program, the longest running radio program at 93 years and the show used to be performed at the historic Ryman Auditorium. When the Grand Ole Opry program was moved to another building, which they aptly named the Grand Ole Opry, a circle from the stage of the Ryman was removed and placed in the stage of the Opry. All that to say, I stood in the circle on the stage of the Grand Ole Opry. I got to stand where so many country music legends have stood and preformed; which I was totally geeking out about. So much so, that when it was our time to have our picture taken on stage, I asked if I could get mine taken alone. Yep, that’s right people, I ditched my hubby and my boys and had a total for-me-only mom-moment. I felt a little bad but nowhere near bad enough to keep me from my moment. Don’t feel too bad for the boys. They don’t like having their pictures taken anyway and Trev told them they could make funny singing faces for their picture, so all was good.

We like to travel a lot, so as a general rule we don’t buy souvenirs. The boys collect pressed pennies and get the occasional key chain. Key chains are usually purchased when Nini and Poppy are around but we let them get guitar key chains this time. This is probably because of the mom guilt I felt when I paid the outrageous price for my picture of me on the Opry stage. Props to my hubby for letting me get it. He knew I would really want it and wouldn’t want to ask and break our rule. He’s so sweet!

Next, we were off to the Hermitage, which was the home of President Andrew Jackson. We spent most of the day here.

The museum had a lot of information. We got to see a duel re-enactment, fitting as Jackson participated in three; one resulting in the death of a Charles Dickenson.

The grounds are pretty and the house was cool to see as things are still as they were when the Jackson’s lived there. 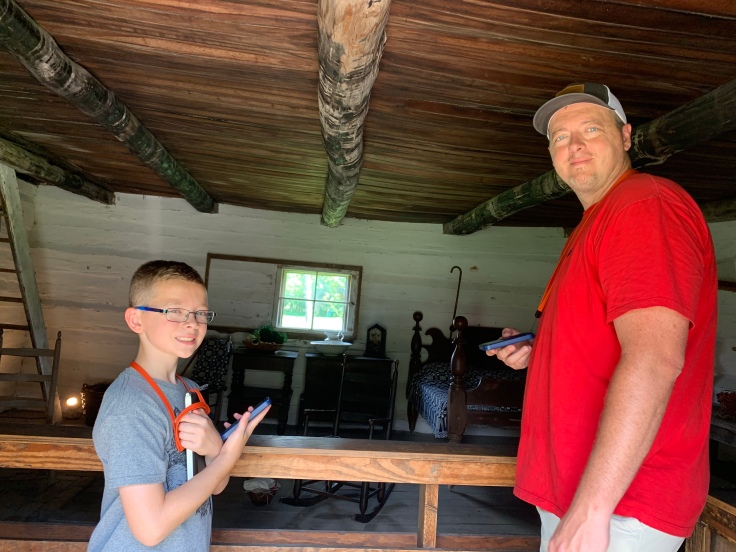 Like many historic places such as this, photography inside the homes is prohibited.

However, the tour seemed to end too soon. We felt rushed. I guess since they can only fit two groups of twelve in the house at a time and the line backs up so quickly, they try to get people in. Especially, right now, as we are in the middle of an extreme heat wave.

Tuck was pretty much done looking around and decided to rest under this big beautiful tree. Kona Ice was set up behind the tree and just about everyone had an icee.

If we had to do it again, we would first tour the house in the morning before it gets too hot. Plus the lines for the house seemed shorter in the morning too. It’s one thing to stand in a long line. It’s another to be pouring the sweat while doing so. Thankfully, we brought water with us. That was a huge blessing. Then we would visit the museum (in the air conditioning) in the afternoon. I’m glad we went. We all learned so much as Jackson lived a very full and colorful life. We toured Monticello, Thomas Jefferson’s estate, last year and found that experience to be better. Not sure if that’s because of the heat, the rushed feeling, or maybe they just can’t be compared apple to apple, so to speak. Just my opinion. However, both are good and I would recommend both.

After being out in the extreme heat for hours, we headed back to the hotel to chill for an hour or so until dinner. After dinner we went to see a Nashville Sounds baseball game. 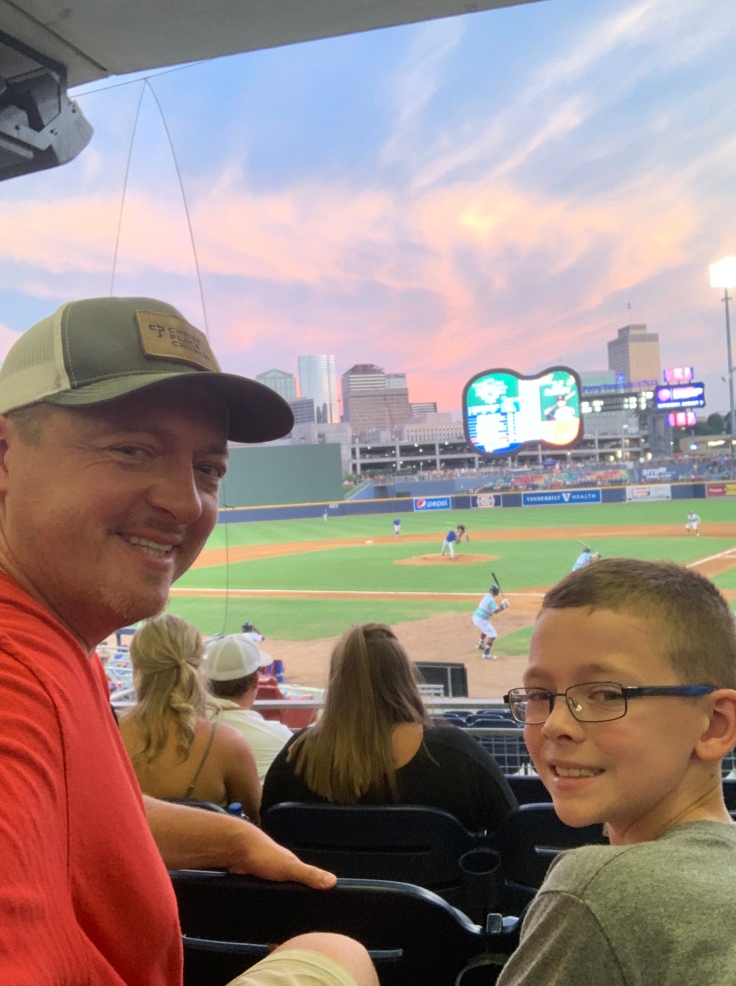 Tucker loves baseball and the minor league games tend to be less stressful due to easier parking and location, cheaper prices, closer seats, and still lots of fun. We had great seats for watching the Sounds beat the Iowa Cubs 6 to 5. He’s even wearing his Rome Braves hat from the last minor league game we attended. The boys were excited “their team” won. 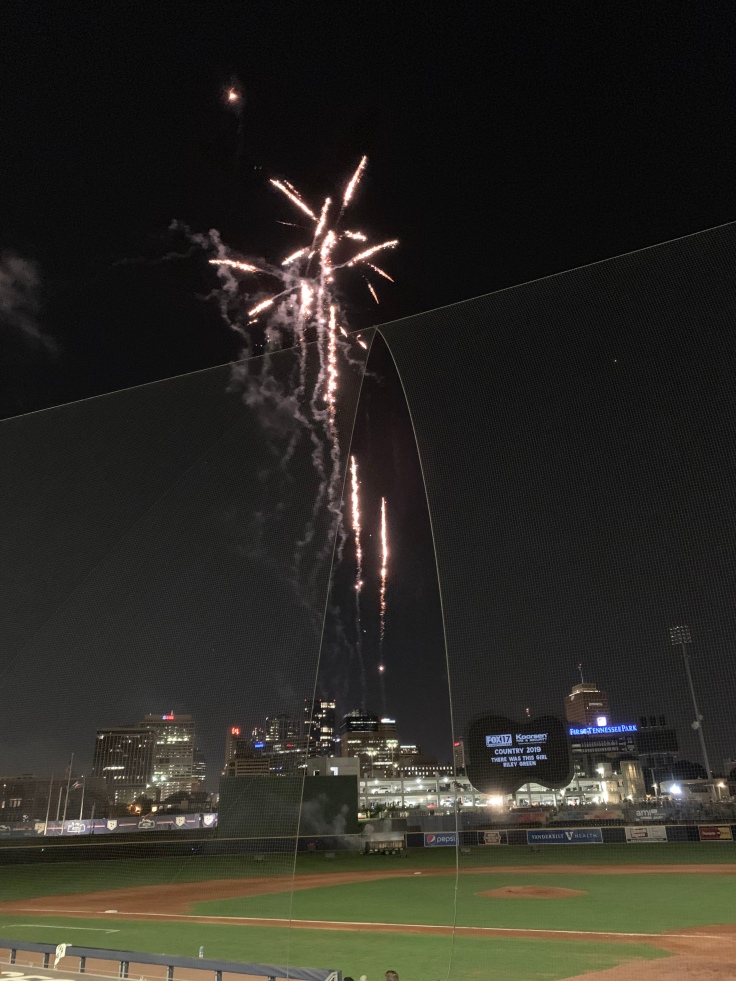 Follow that up with some fireworks and you can stick a fork in the day because we were done. It was way past everyone’s bedtime. Needless to say, the boys slept in the next morning.