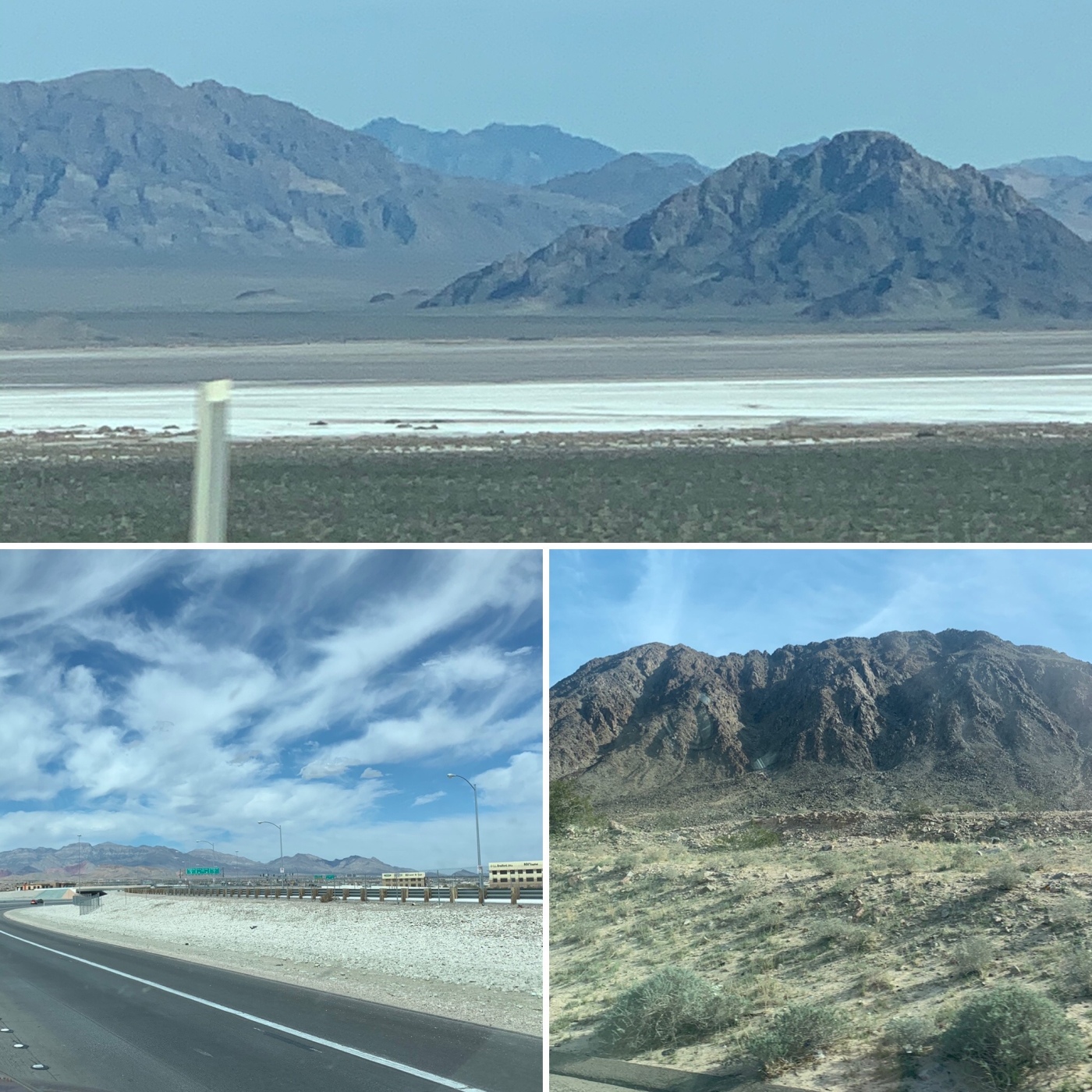 Trevor and I are no strangers to Nevada. We have been several times and we actually eloped to Las Vegas 16 1/2 years ago. The whole fam visited with Nini and Poppy a couple of years ago when we went to Hoover Dam in NV and the Grand Canyon in AZ on our way to the Balloon Fiesta in Albuquerque, NM.

On our way we passed the Mojave National Preserve. Interestingly enough, the largest Joshua tree forest is found in this 1.6 million acre park.

You never know what you’ll see in and around Vegas. The top picture is of Eddie’s World which is actually in California on the way to Vegas. It is California’s largest gas station. The bottom picture is of internationally renowned Swiss artist Ugo Rondinone’s Seven Magic Mountains. It is 10 miles south of Vegas. I’m sorry the picture is so grainy. I had to zoom in from Interstate 15. Trev didn’t care enough about looking at some painted boulders for us to detour.

Trev and I aren’t much for gambling so other than seeing the Vegas lights, we decided to stay right outside of Vegas in Henderson.

We should have stopped at Eddie’s but gas in California was $4.69 a gallon. Thanks to GasBuddy, Trevor wasn’t stopping until we got to the Sam’s in Nevada where the gas was $2.69 a gallon. We still had 10 miles until empty. No worries, we made.

When we were out here last time, Poppy mentioned this place called Red Rock Canyon National Conservation Area. We visited the area and it turned out to be one of the boys favorite places of the whole trip.

They loved climbing the rocks. So when we were mapping our trip, the only place in Nevada the boys wanted to go was Red Rock; so we obliged. Red Rock is a conservation area ran by the Bureau of Land Management and not a National Park but our American the Beautiful pass was accepted here. Sweet. Hours of fun – $0. Yay!

As you drive up, the mountains are beautiful with their stripes of red.

We had a little picnic and then hit the rocks.

Happy little mountain goats out there.

The boys even got to talk to some real climbers about climbing and their gear. They were really nice about answering their questions. That’s them in the top left picture.

The rocks are so deceiving. The way the waves of color swirl around it kinda plays tricks on your depth perception.

It also makes it really hard to tell height and depth in the pictures.

We played a little hid and seek when we hit the valley floor before climbing up the other side.

We had such a great day!

After hours of climbing, we finished the 13 mile scenic drive loop.

Just to back up for a second, we got a late start, as we are a little off schedule from the time change and getting in so late from our flight. We are playing catch up. Due to this late start, by the time we got out to Red Rock is was crazy busy. We sat still in the road waiting just to get up to the turn lane to get in. Tucker has what’s called a National Parks Passport. He gets his book stamped at each National Park we go to. He didn’t have that book when we visited last time, which meant we needed to go to the visitor center. Given the busyness, we decided to head straight to Calico Hills and hit the visitor center on the way out. (The boys did the Jr Ranger program last time, so there was no need to stop by there first this time). Tuck said the loop didn’t go back past the visitor center but we assured him it did. Well, lo and behold, we popped out back out on the road and not back at the visitor center. Oops! We thought, no big deal. We just drove down the road to go back through the entrance again and what do we find there? The gate was closed. They temporarily close the area when they feel it has reached capacity was the reason we were told. Even though we were just in there (and didn’t mean to leave the park) and we only needed the passport stamped, the employee would not let us back in. He said he felt sorry for Tucker but there was nothing he could do. Tuck was so bummed. We should have listened to the little man.

We may make another stop in Nevada on the way back to California but for now we still have one more state that we need to head east to visit. Lots of national parks to visit there. U-otTAHa-know which one by now.