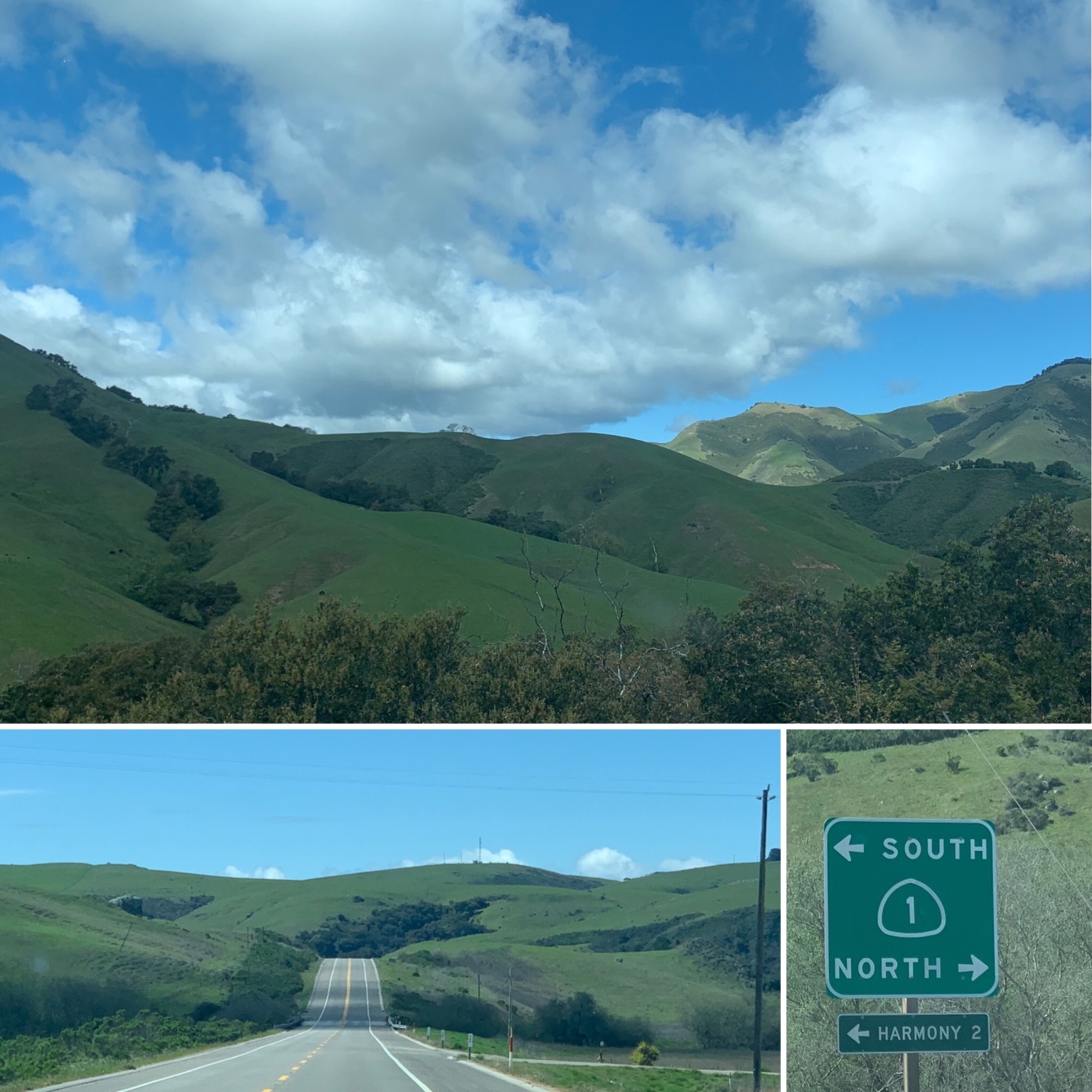 “The 1” is said to be one of the prettiest drives in North America; with beautiful rolling hills on one side and the massive Pacific Ocean on the other. Definitely pretty – but prettiest? That’s debatable.

This post looks a little long but it is mostly just pictures. Not too much to read. Since we are trying to social distance and stay healthy, we decided just to take a drive. The only problem was we drove South to North, which was great for Trevor and Tucker because the ocean was on their side. I’m the one taking pictures so that was kind of stinky. A lot of our pictures have the road in them since I’m not on the ocean side. So depending on if you’re driving or not or if you’re the one taking pictures you might want to to consider that when planning which direction to drive. Just something to think about.

We started in Cambria. Look at those beautiful green rolling hills.

There were plenty of pull offs to get some pictures. My hair is all over my face in every picture due to the wind but who cares, right?

A public service announcement from my boys – Beware the squirrels! They ain’t scared of you. In fact, tons of them rush toward you. It really was a little freaky. Ha!

So pretty and such a tranquil feeling. Not sure what this area is usually like this time of year without a virus going around, but it was pretty quiet.

Well, except for the elephant seals around the Ragged Point area. The elephant seals were all over the beach. March is the end of breeding season so the males and females were on the beach. They come ashore twice a year; once for breeding and birthing and again for molting. This was dumb luck that we stopped at this beach and that it was one of the times they were on the beach. We watched the seals for a long time. I have tons of picture of seals just sleeping on the beach, flicking sand on themselves using the dirt as sunscreen.

These two seals were by far the most vocal. The little guy on the bottom was scratching his tummy. The video I took of him scratching his belly with his flipper is so cute. The seals would make a sound like they were sneezing sometimes. It was so funny sounding. Tuck looked over at me and said, rather matter of factly, “They must have the corona.” This stop was probably where we saw the most people all day but is still wasn’t very many.

It’s truly amazing to see all this land with all it’s flowers and sheep even, by the ocean. It lacks the condos and hotels lining the beach like you usually see. I’m guessing the lack of development is due to it being a designated National Scenic Highway or it could be building codes. I’m not sure but I do think that’s what makes it such a nice drive.

One of the cool things to making this drive is sometimes the view of the ocean disappears behind a bank and then you take a curve and BAM! Big ocean all up in your face.

Two things I read about were McWay Fall and Bixby Bridge; two very recognizable stops when talking about Big Sur. They were on my list of stops to make during the drive. Bixby Bridge (aka Bixby Canyon or Bixby Creek Bridge) is one of the most photographed bridges in California. So I start yelling at Trevor, “There it is! Pull over. Let me get my picture.” So he pulls over and takes my picture. He even gets a picture of both of us. I was so excited…until I wasn’t. In my haste to find the bridge, I stopped at the wrong bridge. Hahahaha. I’m a moron. But hey, me and the hub’s got a sweet selfie.

McWay Falls is an 80-foot tall waterfall, that during high tide becomes a tide fall (meaning it empties directly into the ocean). There are only two such tide falls in California. This one is located in Julia Pfeiffer Burns State Park. I was so excited to find that the park was open. Unfortunately, there was only one trail open and we didn’t want to pay $10 for just that one trail. Oh well.

Right as I was about to get disappointed- first the wrong bridge, then not seeing the falls- there it was. Bixby Bridge – the real one this time. This is the one you always see YouTubers taking drone footage of. It is one of the tallest single-span concrete bridges in the world. And I got my picture with it. Everyone else stayed in the car. Looking back through my pictures these were the best I had. Good grief. You’d think I’d take better pictures if I was that excited about seeing it, wouldn’t you? Look it up online, there’s way better pictures that show the bridge’s true beauty.

Anyway after driving from Bakerfield up the coast, we decided to stop for the night. We are trying to stay out of big cities and we found a little farm town to sleep in. Little did we know we were in Salinas, better known as the Salad Bowl of the World or America’s Salad Bowl. Nicknamed so due to its production of lettuce, broccoli, peppers, tomatoes, strawberries, and spinach; a large majority of the salad greens consumed in the US is grown in this region (per Wikipedia).

Our trip started changing at this point. COVID-19 is now a pandemic and California Governor Newsom, has closed down bars, restaurants, gyms, and other nonessential businesses. Our Triple D stops we had planned are now not going to happen. Mason was SO bummed about this. I felt so bad for the little man. The stay at home order allows for outdoor recreation so we made the best of it and decided to keep heading up the coast on a driving tour. Below is a few pictures of the boys just enjoying being out of the car surrounded by the beautiful outdoors. I call Mason my lemonade kid. He tries to look on the bright side and bounces back from disappointment like a champ.

Tuck just loves life and people are drawn to his big personality.

I wish you could smell the salty ocean air and the earthy green grass.

Time to stretch our legs on the beach.

The boys are looking for shells and Mason was hoping to find a shark’s tooth.

No shark’s tooth but Trevor had the coolest find of the day. That rock was beautiful. You would have just had to see it in person to truly marvel at the delicate looking marks.

We pulled over again to stop for a picnic in Pescadero and we happened upon some harbor seals (bottom left) and two men fishing out on the rocks.

So pretty. (I am in desperate need of a thesaurus).

How cool are these rocks?

These yellow flowers in the green grass just pop against the ocean blue.

Next up we have a Golden opportunity for a photo.