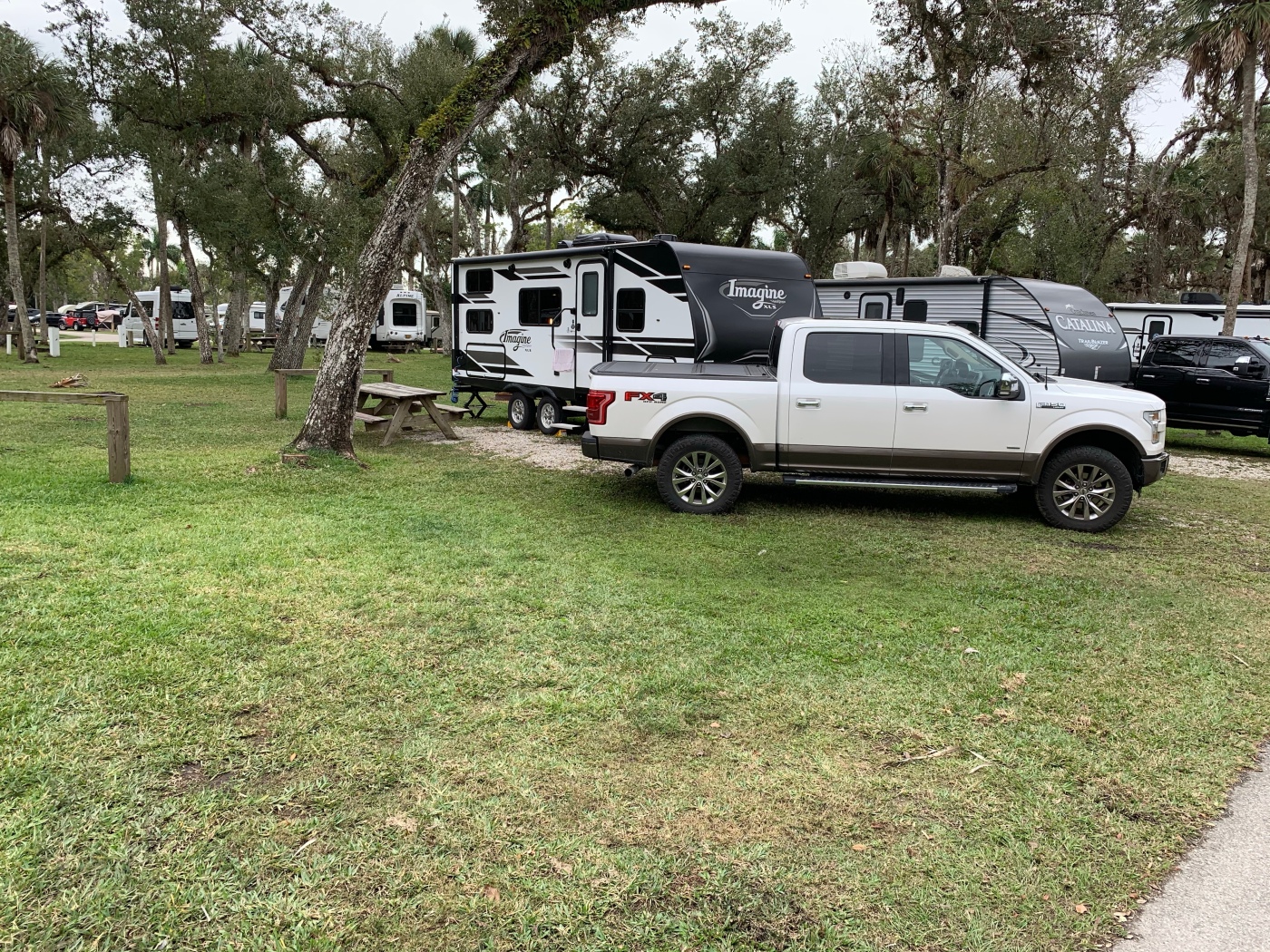 We made it to Collier-Seminole State Park in South Naples. We went from nothing but gators and birds to affluent houses and stores. Just depends on whether you turn left or right out of the park.

We are at site 78. I wouldn’t recommend getting site 77 to the right of us. It has a tree right in the middle of the site so it pushes you close to our site. I felt like we were right in their front door but we had to miss the tree to our left. I have to admit I didn’t love this campground. They staff was friendly and the facilities were clean and newer than many state parks but there was something about it that I just didn’t enjoy.

The weather was overcast so we decided to have a family fun day. We went to Headpinz and had a couple friendly games of bowling, a quick stop at Lowe’s, and dinner at Texas Roadhouse.

We had some issues with our lane at the bowling alley so the manager didn’t charge us for our second game. A bowling league was having a party and shared some goodies with the boys. Sweet. Please don’t ask who won. I don’t want to have my face rubbed in the fact that I lost…repeatedly.

Then Tom at Lowe’s found me a scrap piece of wood instead of having to purchase one. Thank you so much.

At Texas Roadhouse, our waitress was super sweet and the manager found out it was our first time at this location and he gave us a coupon for an appetizer stapled to a bag of peanuts. What great customer service. Talk about a day of blessings.

Interstate 75 from Naples to Fort Lauderdale is called Alligator Alley. I beg to differ. Running almost parallel is Hwy 41, aka Tamiami Trail because it runs from Tampa to Miami, a stretch that runs through Big Cypress Perserve and is better suited for the title, in my humble opinion. Not exaggerating, I bet we saw close to a 100 gators.

I mentioned all the gators we saw during our drive in the last post. We went back to the Perserve today to the visitor center. The Preserve is considered a swamp.

We attended a Ranger talk on manatees and gators. During which we found out why we saw so many gators a couple days ago when it was in the 80s. The park volunteer said the gators can sense a cold front so they we out sunning and getting their food digested before the temperatures dropped. We didn’t see anywhere near as many today when it was about 65-69 degrees. We did get to feel some manatee teeth and ribs. Those ribs are heavy. All bone no marrow.

Mason got his Jr Ranger badge and he received a special patch because he completed the program for all three of the parks in this area. Way to go buddy!

Today broke our sunny day streak. It was the first day since we left back in July that it actually rained on us while we were having an adventure. Granted it was just a very light drizzle so it didn’t rain us out but it did break our little over five month streak. Can’t win’em all.

After the Preserve, we stopped off at the Big Cypress Bend Boardwalk in the Fakahatchee Strand State Preserve just down the road. Don’t tell them my boys tried to climb a huge Cypress tree. In our defense, really just our excuse, the tree was being killed by a Strangler Fig.

This little fella is a ball of emotions. He has such an expressive face. He makes me want to cry just as easy as he makes me laugh my head off. He is usually our entertainment.

This fella is truly starting to become a young man. At this tween age you start to get glimpses of manhood mixed with childhood. He is such a wonderful human but I can see the teenage moodiness heading our way.

These two are such close buddies.

This Strangler Fig has this Cypress tree in its grasp. It looks like it’s reaching down and grabbing it so I had to black and white the picture to add to the spooky affect.

The weather cooperated so we continued with our plan to head out to Marco Island the next day. Marco Island is a very developed island but there’s still plenty of beach. The beach is super wide in some places.

We parked at Tigertail Beach Park. There was an $8 fee for the four of us. Trev had read that you could walk across the saltwater lagoon to get to the ocean. Tigertail beach is on a lagoon so it’s not so great for beaching it. It’s kind of a muddy feeling at the water. They have kayak, paddle boards, and aqua trucks for rent if you’d like. We decided to continue across the lagoon to the ocean side. The boys waded across and I took the very long way and walked around the lagoon. You know I’m not getting in the water.

It was a smart decision. Once on the other side, you’re on the beach at Sand Dollar Spit on the Gulf of Mexico. The beach has sugary white sand with a TON of shells. The boys found a dozen or more sand dollars and conch shells along with a puffer fish. The boys had a great day collecting shells and playing in the shallow water. It was a fun way to celebrate the start of Christmas break. Tuck was excited school was over until January.

After an amazing day at the beach we headed back to camp. I love traveling. There’s so much to learn and there’s usually way more to a story than expected like in the case of the formation of Collier County and the Tamiami Trail. Part of that history is at the state park were we stayed. Below is a picture of the boys in front of the dredge that helped to create the road. Pretty impressive. It’s hard to tell from the picture but this thing is huge.

Next up is another state park where I am hoping to see more of my new favorite animal.